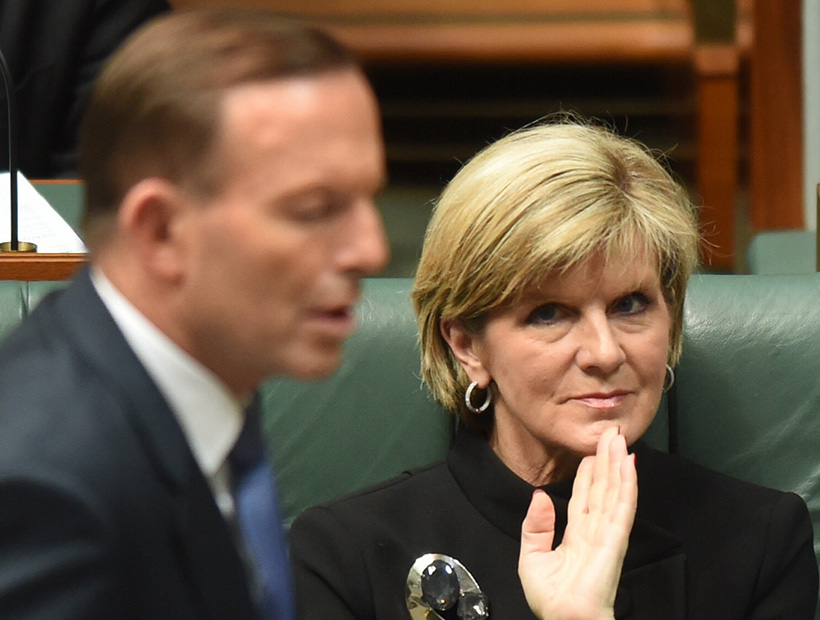 If there’s a standout performer from the first full year of the Abbott government, it’s Foreign Minister Julie Bishop. There aren’t many who would have picked that after election day.

But as the government battles for control of the national debate, and Tony Abbott languishes in the polls, speculation has arisen about who might get the top job should there be a spill.

Ms Bishop’s stellar year has her well positioned as a contender. But how realistic is her candidacy, really?

• Tony Abbott announces review into Sydney siege
• Tribute to the lost shows Australia’s true colours
• Why was the Sydney gunman on our streets?

Until mid this year, Ms Bishop was known more for being the deputy leader who survived not one but three successive Liberal opposition leaders, and the only woman in the Abbott government’s cabinet.

This changed on 17 July when the civilian plane MH17 was shot down over the Ukraine, killing all on board including a number of Australians.

The public tends to respond favourably to governments of the day when there’s nationally-shared grief. The Prime Minister gained modestly in public approval from taking on the mantle of national protector, but it was Ms Bishop who really shone.

After being speedily dispatched to the United Nations Security Council, Ms Bishop’s national and international profile soared as she worked with Australian diplomatic officials to formulate and then secure the passage of a resolution on the need for investigators to have unfettered access to the crash site.

The Prime Minister may have later threatened to “shirtfront” Russian President Vladimir Putin at the November G20 meeting over access to the site, but it was Ms Bishop who got to Mr Putin first, securing his agreement at an October meeting in Italy to ask the separatists to provide access.

Actions like this have ensured voter support for the Foreign Minister has continued to grow as she represents the interests of Australia abroad. Even before the meeting with Mr Putin, Ms Bishop was found by an opinion poll to be considered the best-performing minister of the Abbott government, admittedly at a lowish score of 57.6 per cent, but higher than the usual favourite Malcolm Turnbull’s 51.1 per cent. She was also found to be the third-most well-known minister after the Prime Minister and the Treasurer.

More recently, Bishop was found by another opinion poll to be equal preferred prime minister with Tony Abbott, although Mr Turnbull continued to prevail over both. Her recent insistence on attending the international climate change talks in Peru may change that configuration yet again.

Mr Abbott’s national security-driven poll boost has dissipated since July, particularly after a less-than-stellar performance at the G20 meeting (including an unfortunate photo shoot with Putin and koalas).

But Ms Bishop’s has remained strong, leading to some admittedly mischievous speculation that she could be an excellent alternative Prime Minister.

Despite Abbott’s polling woes, the odds are against the Foreign Minister replacing him.

Firstly, a Liberal MP from Western Australia has never been Prime Minister or Opposition Leader. This is because the leadership of the Liberal Party is traditionally (but not always) held by an MP from either NSW or Victoria because the more populated states hold a higher number of seats in parliament and votes in the party room. As a result the leadership team is often shared between those two states.

This brings candidates such as Joe Hockey, Malcolm Turnbull and Scott Morrison into play.

Treasurer Hockey was considered the clear heir to the throne until he monumentally botched the budget and its public relations campaign this year.

Turnbull continues to be the progressives’ darling with good support in the broader Australian community but almost none in the party room. And Mr Morrison is the dark horse, having won over the dominant hard right in the Liberal Party for his hardline approach to asylum seekers and ‘stopping the boats’.

The question remains though whether the Coalition – and the country for that matter – is ready for a female Liberal leader. Bishop may famously refuse to perceive herself or measure her ability through the prism of gender, but that’s not to say others won’t. And if the (current) Prime Minister is correct in his assessment of Liberal MPs being prejudiced against his Chief of Staff because of her gender, then there’s nothing to prevent the same sexism influencing the selection of the next Liberal leader.

Mr Abbott may well be heading into the summer break with a lower approval rating than Kevin Rudd’s worst, and voters may think he’s unlikely to survive as PM, but Australia remains two years away from the next federal election.

As we have seen this year, time and again, anyone’s political fortunes can change in the blink of an eye – or more likely – the click of a mouse.

It may be fun to speculate on who could be the next Liberal Prime Minister but, this far out from the election, it’s as meaningful as predicting the winner of the next Melbourne Cup.