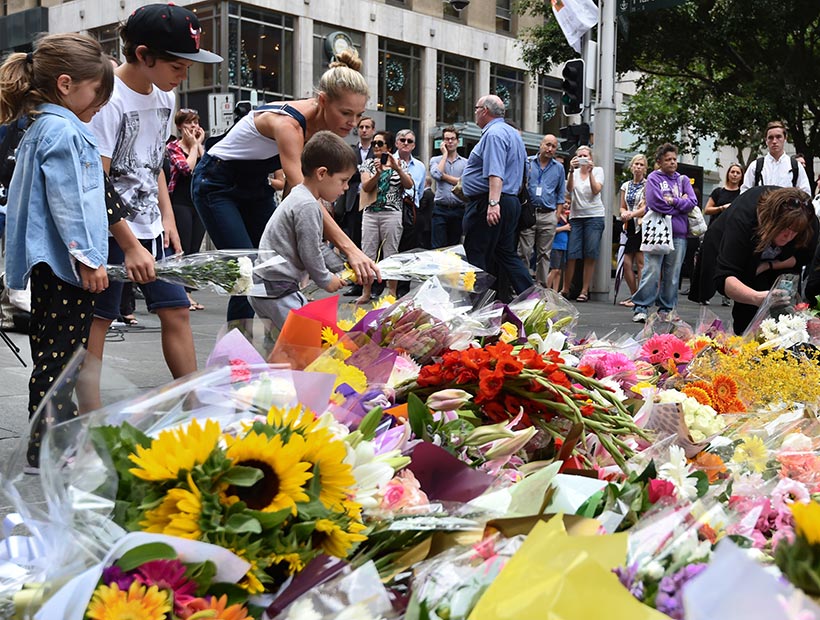 However, government MPs have questioned why the criminal responsible for the siege was not already in jail.

Gunman and self-proclaimed cleric Man Haron Monis and two of his hostages died at the end of a 16-hour siege in Sydney’s CBD, in the Lindt cafe before dawn on Tuesday.

Monis was well known to NSW police, having been bailed last year on an accessory-to-murder charge and was also facing a series of indecent and sexual assault charges.

He had also threatened the families of dead Australian soldiers and publicly challenged Mr Abbott to a debate over the merits of the Afghanistan war.

Expressing his condolences to the families of the hostages, the prime minister said Monis was “well known to state and commonwealth authorities”.

“He had a long history of violent crime, infatuation with extremism and mental instability,” Mr Abbott told reporters.

Liberal MP Alex Hawke wrote on Twitter: “We must also ask our judicial system why a known criminal who hated our country was not in prison.”

Mr Abbott received several briefings on the incident and convened a meeting of the national security committee of cabinet.

“Plainly, there are lessons to be learnt and we will thoroughly examine this incident to decide what lessons can be learnt,” he said.

The prime minister said Monis had “sought to cloak his actions with the symbolism of the ISIL death cult”, referring to the extremist group which has seized parts of Iraq and Syria.

Opposition Leader Bill Shorten joined the prime minister in expressing the heartfelt condolences of the nation.

“I hope in time there can be a permanent memorial to the victims of this horrific event,” Mr Shorten said.

“There is still a lot to learn about why this happened and indeed what happened. We need to also learn how we can ensure that this doesn’t happen again.”

Australia’s intelligence partners have been working with agencies such as ASIO to get a more detailed picture of how the incident occurred.

“It’s a reminder, albeit on the other side of the world but a country very close to all our hearts, of the threat we face from Islamist extremist terror,” British PM David Cameron said.

Former FBI counter-terrorism analyst Matthew Levitt said it appeared to be more a case of “lone offender violence” than an act of terrorism.

He said despite Monis being known to authorities it would not have been possible to keep tabs on him.

“Outside of the movies, in the real world no law enforcement agency, not locals, not AFP, not FBI, has the resources to track everybody who’s of any interest whatsoever 24/7,” he told the ABC.

‘We will learn from this tragedy’