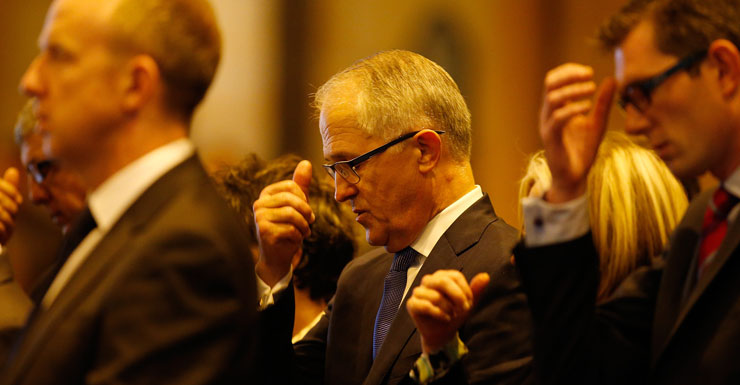 Cabinet minister Malcolm Turnbull has won praise for an emotional speech urging Australians reeling from the tragic Sydney siege to unite and love one another.

The federal communications minister fought back tears addressing media after attending a memorial Mass at St Mary’s Cathedral in Sydney on Tuesday – a few blocks from where two hostages and a gunman died only hours before.

• Abbott says Sydney siege gunman was ‘sick’
• ‘We will learn from this tragedy’: PM

Mr Turnbull recalled the “numbness” and shock of fellow commuters with whom he shared a train carriage that morning.

“Everyone was thinking the same thoughts of shock, of horror, of imagining how those people suffered during that terrible night, thinking about the courage of those two young people killed,” he said.

But he also felt a determination that Australians would stand firm against hatred with a sense of love.

“It’s love for each other, it’s love for our country, it’s that which binds us together and makes this the most successful, harmonious society in the world,” a visibly emotional Mr Turnbull said.

“I thought today’s service was so beautiful because it was all about love, that love of God, the loving example of Jesus that should inspire us all not to be corrupted by hatred and violence but to remain united as Australians, now and forever.”

A video of the speech shared by the minister on his Facebook page has been viewed more than 12,000 times and shared by hundreds.

Some were quick to compare the one-time Liberal leader’s words with that of Prime Minister Tony Abbott’s.

“Malcolm Turnbull says more about #sydneysiege in 2 minutes than Abbott has said in 36 hours,” one tweeted.

“This is the best response to what’s happened this past 24 hours,” another said.

Lawyer George Newhouse, who lost to Mr Turnbull in the fight for the seat of Wentworth in 2007, thanked his one-time rival for “beautiful, sincere” words.

“I couldn’t have lost to a more decent politician,” he tweeted.

However, there were some criticisms.