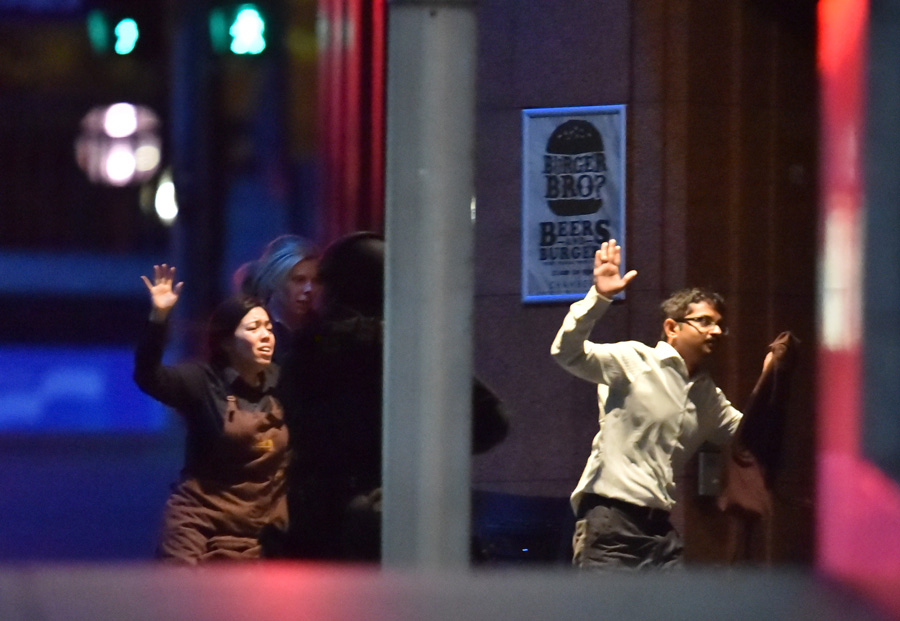 Friends and family of siege victims Katrina Dawson and Tori Johnson have remembered them as loving and generous people.

The pair died following a near 17-hour siege at the Lindt café in Sydney’s Martin Place.

• Siege victims: mother of three, hero manager
• Tribute to the lost shows Australia’s true colours
• ‘We will learn from this tragedy’: Abbott
• Who was the siege gunman?
• GALLERY Pictures tell the deadly story

Gunman Man Haron Monis, an Iranian cleric on bail for a string of violent offences, was also killed after police stormed the café following reports of gunfire.

Four hostages suffered from what police described as “traumatic injuries”.

At work, she was admired for her legal skills, vivacious nature and razor-sharp intelligence.

At home with her three children and husband, she was the world.

Ms Dawson, the sister of well-known Sydney media lawyer Sandy Dawson, was visiting the cafe with a colleague, Julie Taylor, who survived the siege.

“She was very lovely. A very vivacious, happy, loving woman. A very loving mother, she was a fabulous person. We all worked with her. We all knew her quite well,” Penny, a workmate, told AAP.

“We miss her terribly.”

The NSW Bar Association paid tribute to one of their “best and brightest”.

“Katrina was one of our best and brightest barristers who will be greatly missed by her colleagues and friends of the NSW bar,” association president Jane Needham SC said.

Ms Dawson, 38, excelled in her studies, topping the state in the Higher School Certificate in 1994 and her bar exams.

Her school in Sydney’s east, Ascham, said Ms Dawson was generous with her time.

“Katrina is remembered affectionately as an outstanding student who excelled in all aspects of school life and was much loved by her peers and teachers alike,” head of school Andrew Powell said.

“She was generous in the giving of her time, and this year Katrina used her skills as a barrister to guide our senior students in preparing for mock trials.

“Our hearts go out to Katrina’s entire family, including her husband, Paul, and her children, Chloe, Sasha and Oliver.”

Tori Johnson will be remembered as a hero, an amazing son, partner and brother who always put others first.

Mr Johnson’s parents, Ken and Rosemary, released a statement mourning the loss of their son.

“We are so proud of our beautiful boy Tori, gone from this earth but forever in our memories as the most amazing life partner, son and brother we could ever wish for,” the statement read.

Bruno Filletti, who worked alongside him at the cafe and narrowly avoided the siege on Monday, said his 34-year-old friend was a “hero”.

“The only word that can be used to describe Tori,” he said on Facebook.

“He died trying to save another’s life. He sacrificed himself to save everyone.

“You may be gone but never forgotten my friend.”

Authorities have yet to confirm reports Mr Johnson wrestled hostage-taker Monis, 50, in the final minutes of the siege.

“He was an amazing man,” said Peter Manettas, who worked with Mr Johnson for nearly seven years at the Adria Bar Restaurant in Darling Harbour.

“He was a selfless person who always put staff above everyone.

“He put himself second.”

In Wollongong, Mercedez Hinchcliff said Mr Johnson once made a special batch of chocolates for her young son, who has a rare disease that limits him to a diet of fewer than 50 foods, and invited them to the Lindt cafe to pick up the gift.

“It taught him that people go out of their way for people,” Ms Hinchcliff told the Illawarra Mercury.

Here’s what we know about some of the other 15 hostages who were caught up in the ordeal but survived.

Julie Taylor, a friend and colleague of victim Ms Dawson, managed to make it out of the hostage situation alive.

Ms Taylor appeared in one of the hostage videos uploaded during the siege.

According to The Australian, Mr Balafoutis was another barrister held hostage in the Lindt Cafe.

He reportedly joined the bar in 2002 and is working to help police in their investigation.

Mr Balafoutis is believed to be one of the five hostages who managed to escape the cafe around 4pm on Monday.

The 43-year-old mother of three is reportedly still in shock and could remain in hospital for up to a week.

Ms Mikhael underwent surgery at Royal North Shore Hospital on Tuesday after suffering a gunshot wound to the leg.

“She just had an operation on both legs, I think for shrapnel,” a family member said.

“She’ll be here for a week. She requires skin grafts. She’s still in shock. He (the gunman) was using her as a person to send messages on Facebook, being his right-hand woman.

“When they escaped, she was so scared. She hid under the table. She was so close to him she was afraid she’d get shot.

“It’s unfortunate she was in the wrong place at the wrong time. She’s talking, she’s in shock, we try to change the subject.”

Ms Mikhael was one of four Westpac employees held hostage in the siege.

Sydney University student Elly Chen has been identified as one the two female Lindt workers who managed to run from the cafe around 5pm on Monday.

Footage of Ms Chen and her co-worker escaping from the hostage situation has gone viral all over the world.

Viswakanth Ankireddy, a 32-year-old software engineer from India, was one of the 17 people trapped inside the Lindt Cafe.

Harriette Denny, 30, worked at the Lindt Chocolate Cafe and ran from the building with five other hostages just before police launched their assault.

Her father, Robert Denny, said his family spent an anxious night watching the events unfold on television but had since spoken with his daughter.

“She’s OK, she’s tired, she’s relieved,” he said, adding she was distressed that duty manager Tori Johnson did not make it out.

Paolo Vassallo, a married father of three, was one of the first hostages to escape from the cafe on Monday afternoon.

He was reunited with family members after being taken to hospital for observation last night because of a pre-existing condition.