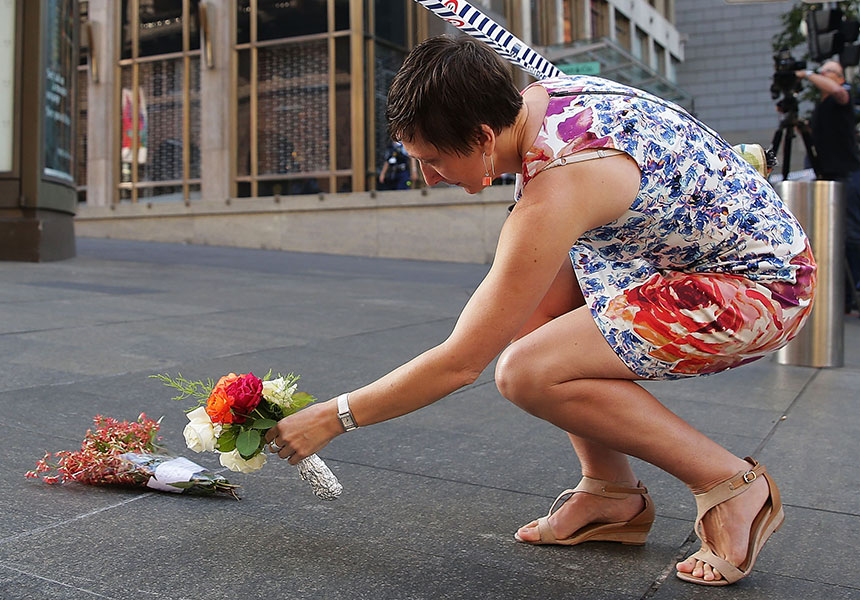 The NSW police commissioner has joined Sydneysiders at a makeshift memorial near Martin Place honouring the two hostages who lost their lives in the Lindt cafe siege.

Andrew Scipione arrived at the scene just before 9.30am on Tuesday.

He stood and looked at the floral tributes laid by members of the public and paused for a moment of silence before leaving.

“I don’t think I could be sadder,” he told reporters.

“Having said that I’m incredibly proud of our police and what we’ve done.”

Hostage-taker and self-declared Muslim sheik Man Haron Monis walked into the cafe on Monday morning and held 17 people in a 16-hour siege.

Premier Mike Baird announced flags on all NSW government buildings, including the Sydney Harbour Bridge, will fly at half-mast on Tuesday to honour those who lost their lives at the cafe.

Allen Jing, 25, travelled from Pymble on Sydney’s north shore to place a bouquet of flowers at Martin Place.

“I was a regular customer at the coffee shop and I feel like those people suffered instead of anyone of us,” Mr Jing said.

“It’s hard to explain how something like this makes you feel, I guess just glad to be alive.”

“Today the people of NSW and Australia have the heaviest of hearts and we are taking steps to allow the community to share our collective grief,” Mr Baird said.

“Overnight we lost two of our own people, in an attack we thought we’d never see here in our city.