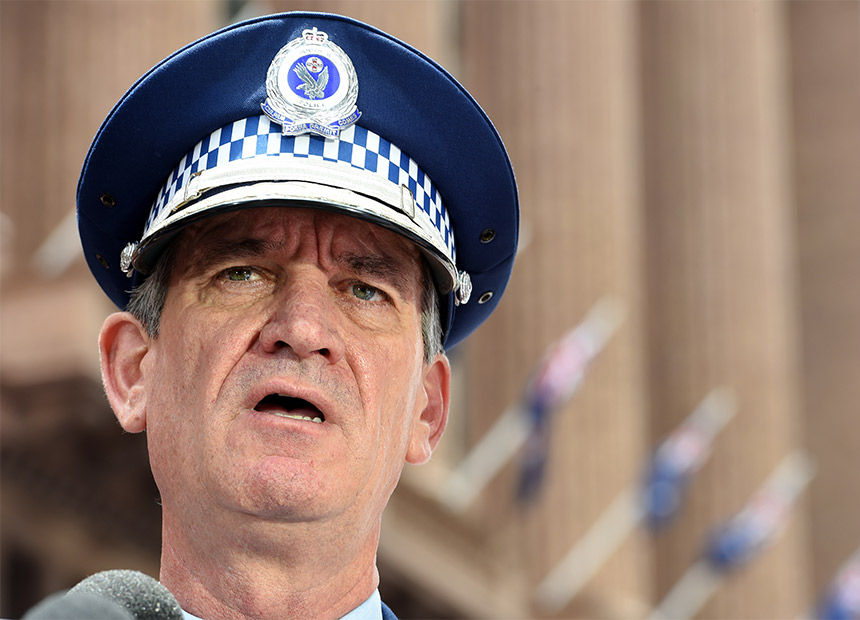 The NSW’s top police officer has weighed into the bail debate, saying police had long-held concerns that the Sydney siege gunman had been free to roam the streets.

Man Haron Monis entered the popular Lindt Chocolat cafe in Sydney’s CBD on Monday morning in a fatal siege, which ended with the deaths of two of his hostages.

• We will learn from this tragedy: Tony Abbott
• Who was the siege gunman?
• Siege victims: mother of three, hero manager
• GALLERY Siege photos tell deadly story

Amid public outcry over why the mentally unstable Monis was not behind bars despite having a long history of alleged violence, NSW Police Commissioner Andrew Scipione said his officers had always thought Monis should not have been granted bail.

“We were concerned that this man got bail from the very beginning,” he told reporters on Wednesday.

But Mr Scipione stressed it was ultimately up to the courts to make bail decisions.

“We can apply and seek to have offenders like this not in circulation but of course we don’t make the final determination,” he said.

“Whilst we sought to have his bail refused, that wasn’t to be.”

Earlier on Wednesday, Prime Minister Tony Abbott said the lives of innocent people were claimed because of the “sick fantasies” of the Sydney siege gunman.

But he also paid tribute to the character of citizens who had opened their hearts to members of the different communities who make up the multicultural nature of Sydney.

“Decent, innocent people (have been) caught up in the sick fantasy of a deeply disturbed individual” Mr Abbott told reporters in Sydney.

“We have seen the consequences of this play out over the last 36 hours.”

Mr Abbott said that every Sydneysider should quietly proud of the way the city had handled one of the most difficult periods in its history.

“People have responded with typical Australian decency and generosity,” he said.

The spontaneous shrine at Martin Place was expression of that innate goodness which was a mark of the Australian character.

Australia was not immune to politically-motivated violence, which had for so long stalked other countries, Mr Abbott said.

“We have responded to this in character, with grit, with stoicism, with equanimity.

“I am absolutely confident that whatever happens in the days and weeks and months to come, Australia will always be a free and open and generous society.”

Mr Abbott said regardless of whether Monis had been on the watchlist of authorities, it was likely that such a crime may not have been prevented.

“It’s quite likely, certainly possible, that this incident could have taken place,” he said.

“Because the level of control that would be necessary to prevent people from going about their daily life, would be very, very high indeed.”

“We are all outraged that this guy was on the street,” he said.

“We need to ensure that everything is done to learn from this.”

Investigations would establish the facts and help authorities answer the public’s questions, he said.

Mr Abbott hosed down suggestions of a copycat attack, saying that would involve someone emulating a long history of violence, sexual assault and infatuation with extremism.

“There was nothing consistent with this individual’s life except he was consistently weird,” he said.

“Now I don’t think that anyone, anyone would want to emulate that.”

Mr Abbott has spoken to the NSW policeman who was shot in the face during the siege.

He also indicated he would be in contact with the families of the victims at an appropriate time.

“I certainly don’t want to intrude on anyone’s grief,” he said.

Monis should have been jailed