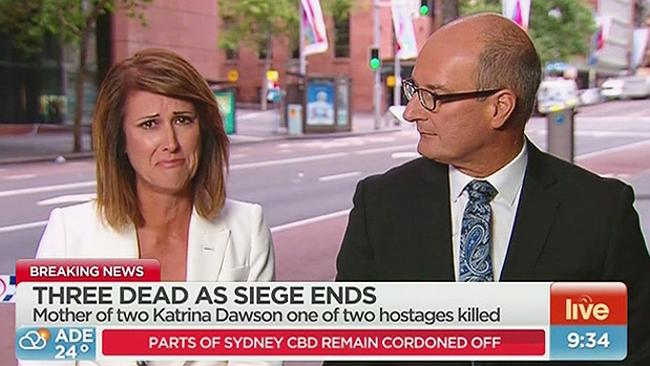 A combination of shock, horror and sadness spread across Australia on Tuesday as news spread about the deaths of two innocent civilians during a hostage siege.

Those at home and abroad mourned the loss of 38-year-old mother Katrina Dawson and 34-year-old Lindt store manager Tori Johnson.

The emotional impact of the deaths was illustrated on Channel Seven’s Sunrise program on Tuesday morning, when reporter Natalie Barr down on air.

Barr, who was broadcasting live from the scene of the siege, was friends with Ms Dawson’s brother Sandy Dawson, a former Channel Seven employee.

Visibly upset, she struggled to break the news of Ms Dawson’s death, prompting her co-host David Koch to take over the broadcast.

Others working in the area were distressed by near-miss encounters.

One woman broke down explaining how she typically bought coffee at the Lindt Cafe but chose not to that morning particular morning.

Lindt employee Kathryn Chee shared her shock at hearing the news just before leaving for her shift at the Martin Place cafe.

“The first pictures were of the people with their hands against the windows,” Ms Chee told the ABC.

“Straight away there were people that I knew. From their outline I knew exactly who they were. My heart just sank.”