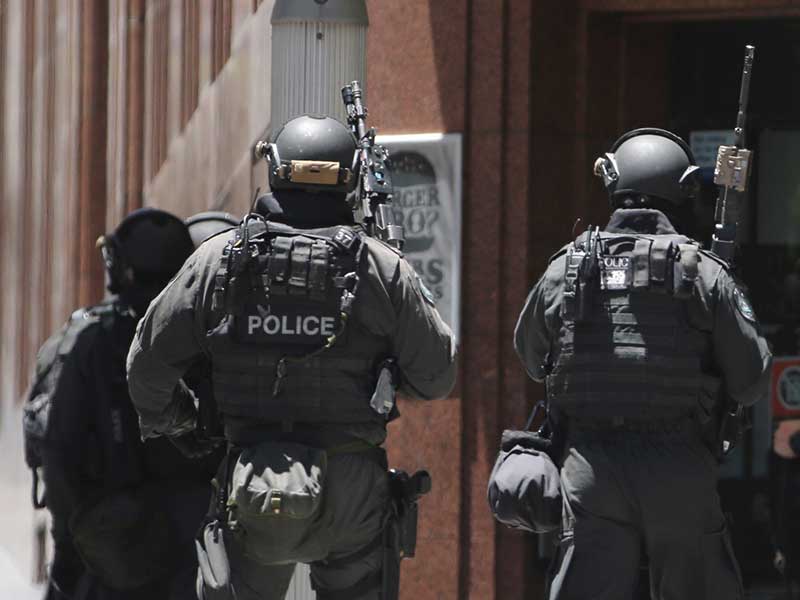 At least one armed offender continues to hold at least a dozen people hostage in a popular Sydney café, as NSW Police move into anti-terrorism mode.

Shortly before 2pm – about four hours after the siege began – the state’s police commissioner Andrew Scipione said he was unable to confirm the motivation behind the attack, but could not rule out terrorism.

Hostages have been filmed holding up a black and white flag in the window of the busy Martin Place café.

Commissioner Scipione said the motivation behind the attack was still being determined, however he could not rule out terrorism.

“We have certainly moved to a footing that would be consistent with terrorism,” he said.

Commissioner Scipione said no contact had been established with those inside the café, contradicting unconfirmed reports that a Sydney radio host had been contacted by someone inside the Lindt Chocolate Café.

He also confirmed that the earlier arrest of a Beecroft man on terrorism charges was unrelated to the Martin Place incident.

NSW Premier Mike Baird reminded residents that Sydney was open for business, with the exception of the area surrounding the incident.

“Can I ask everyone to go about everything in a usual manner? Obviously avoid Martin Place,” he said. “There will be transport updates but go about your usual exit from city.

“Can I also just ask as you’re moving around CBD to be aware, to be vigilant and ensure at all times that you’re also patient

“We will get through this. Importantly now our thoughts and prayers are with those caught up in the situation and we say to them ‘we are with you’.”