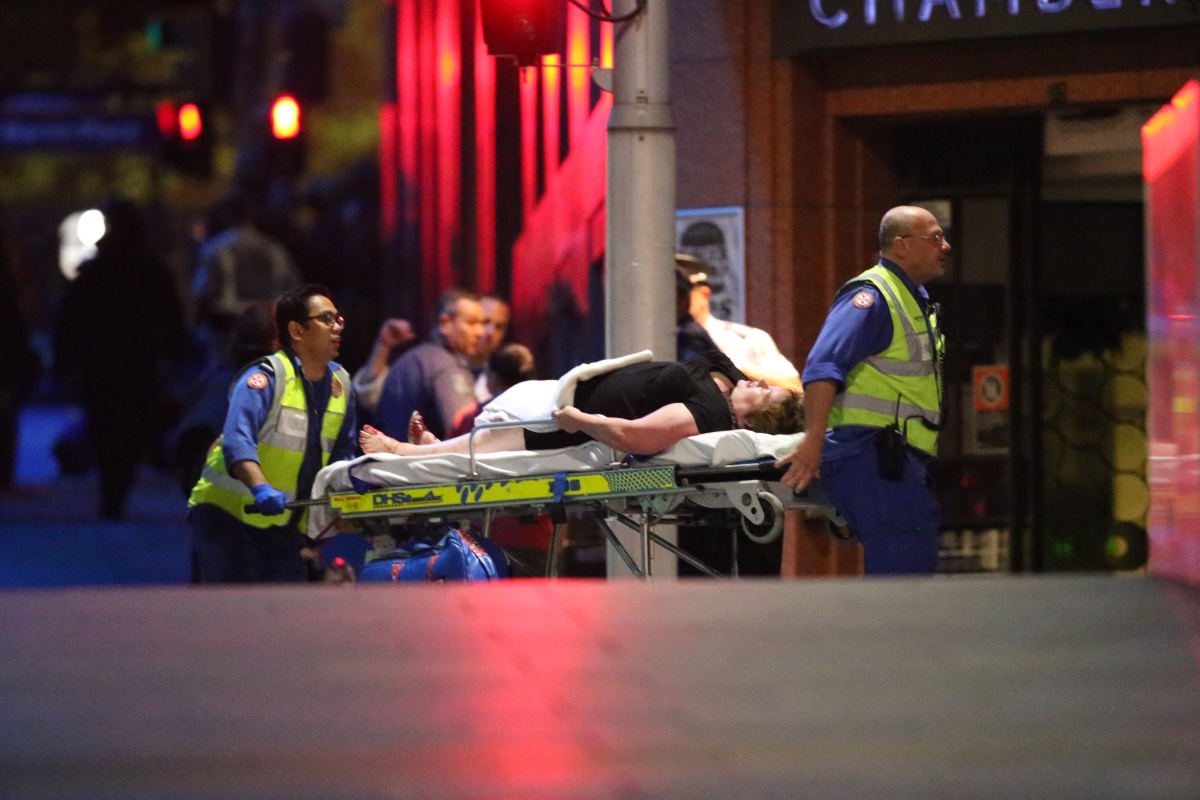 A 38-year-old mother-of-three was one of two hostages who died in the Sydney siege that ended just after 2am today when police stormed a Sydney cafe killing the gunman who’d taken them and 15 others captive.

It was unclear whether Katrina Dawson died before or during the shootout between police and lone gunman, Man Haron Monis, a 50-year-old self-described Muslim cleric who was on bail on a number of serious charges, including accessory to murder and sexual assault.

The other hostage killed was a 34-year-old man who Seven News identified as Lindt Cafe manager, Tori Johnson, who is being praised as the hero of the hostage situation.

Nine News is reporting Mr Johnson was wrestling a gun from gunman Man Haron Monis when he was killed. It is understood the 34-year-old decided to take action when the hostage-taker began to doze off after the siege had been ongoing for 17 hours.

He and Ms Dawson were pronounced dead after being taken to hospital, marking a tragic end to the protracted siege inside the Lindt Cafe in Sydney’s Martin Plaza. The New South Wales Bar Association released a statement about Ms Dawson.

“Katrina was one of our best and brightest who will be greatly missed by her colleagues and friends at the NSW Bar,” it said. “She was a devoted mother of three children, and a valued member of her floor and of our bar community.”

Two other members of the NSW Bar were held as hostages with Ms Dawson.

Fairfax described Ms Dawson as a mother of three and rising star at the commercial bar. She was a highly respected barrister from Eighth Floor Selborne chambers in Phillip Street, and the younger sister of prominent defamation barrister Sandy Dawson and McKinsey & Company director Angus Dawson.

The Ascham old girl topped the state in the Higher School Certificate in 1994, with a TER of 100, and topped her bar exams, Fairfax reported.

She has three children aged under ten – two girls and a boy. The youngest, a girl, is four years old.

The gunman, identified as Man Haron Monis, was shot dead by police after they entered the cafe around 2.10 am. It was later revealed he was on bail on a range of charges including being an accessory to murder and sexual assault.

Four people – three hostages and one police officer – were wounded in the violent climax to the siege.

As details emerged of the siege and its deadly conclusion, NSW Premier, Mike Baird, made an emotional plea for understanding and unity.

Prime Minister Tony Abbott said it would take time to find out exactly what happened in Martin Place.

“These events do demonstrate that even a country as free, as open, as generous, as safe as ours is vulnerable,” Mr Abbott told media at a Tuesday morning press conference.

“What we do know is that the perpetrator was well known to state and commonwealth authorities. He had a long history of violent crime, an infatuation with extremism, and mental instability.

“As the siege unfolded yesterday he sought to cloak his actions with the symbolism of the ISIL death cult. Tragically there are people in our community ready to engage in politically motivated violence.”

Shortly after 2 am on Tuesday, horrifying pictures beamed around the world showed police opening fire as they moved into the café after a loud, sudden explosion rocked the scene.

When the gunfire ended, a second explosion rang out, before paramedics rushed to the aid of wounded hostages.

Victims’ families stationed near the café watched and listened as their nightmare unfolded.

By 3am, NSW Police had released a statement via Twitter with the words Australians had been waiting to hear since Monday morning: “Sydney siege is over.”

NSW Police commissioner Andrew Scipione said the incident was “the act of an individual” which “should not change our lives” and urged the community to bind together.

He said the 17 hostages involved in the ordeal had all been accounted for and acknowledged the terrifying situation they had faced – five of them had emerged yesterday, two were dead and the others had walked free following the shootout.

“I can only imagine the terror they’ve been through,” the Commissioner said. “In many instances they were only buying a cup of coffee and were caught up in this dreadful affair.”

Commissioner Andrew Scipione said it was too early to speculate how events had unfolded inside the cafe.

“It is not time to speculate or develop theories,” Commissioner Scipione said.

“They (police) made the call because they believed if they didn’t enter there would be many more lives lost.

“Events that were unfolding inside the premises led them to believe now was the time to deploy and they did.”

He said a number of gunshots had been heard which convinced officers to move to an emergency action plan.

A full investigation would be conducted by the coroner, he said.

He commended officers at the scene.

A statement from police at 5.34 on Tuesday morning confirmed the 50-year-old gunman was pronounced dead after being taken to hospital.

• Siege puts other capitals on alert
• Martin Place: second in a new wave of terror?
• #illridewithyou takes off on social media after Sydney siege

Just minutes before the confrontation, a group of about five hostages emerged from the building.

Their emergence came after five more people – three men and two women – walked out on Monday afternoon. It is unclear whether they escaped or were released.

A hashtag showing support for Muslim Australians took off on social media following the siege. #illridewithyou has already been tweeted 17,000 times since it began on Monday morning, and has been rising by hundreds of tweets per minute.

The hashtag appears to have come from a tweet from a woman who was riding on a train in Sydney, who noticed a Muslim woman quietly take off her head covering.