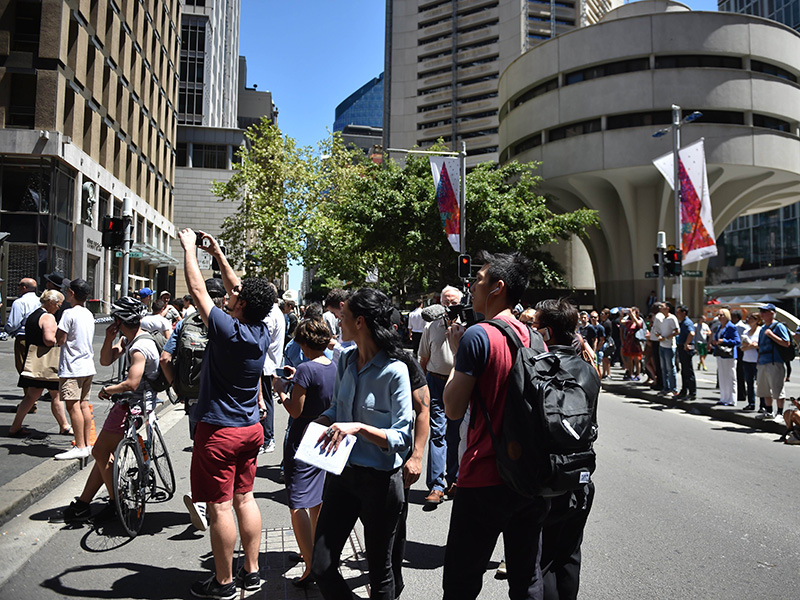 In the late afternoon sunshine, a crowd of about 400 people gathered near the cordoned-off area in Martin Place. The mood in the crowd was relaxed, almost festive.

In fact, if you didn’t know any better, you could be forgiven for thinking there wasn’t an unfolding hostage crisis just metres away.

Around the media scrum, office workers, sightseers and foreign tourists snapped photos and chatted on their phones. Most appeared undaunted by the fact an armed gunman was holding hostages in a nearby café.

Many had just ‘popped in for a look’, some were cracking jokes, while others were even going so far as to take ‘selfies’ with the terrifying scene behind them as a backdrop.

This correspondent’s taxi driver joked that the hostages trapped in the Lindt Chocolate Cafe siege would, at least, “have plenty to eat”.

Meanwhile, more than a dozen people and their families were fearing for their lives.

A couple of Spanish lads in lurid plastic sunglasses also posed for a holiday snap in front of the police cars and ambulances on stand-by.

Another young bearded man was emulating a TV reporter by pretending to do a piece-to-camera by talking into a sunblock stick. His friend recorded it on his smart phone.

One young man told The New Daily he lived near the city and had come in for a look.

“My mate’s in the office building opposite and he’s really annoyed he can’t leave. We were supposed to be going to a Christmas party.”

One elderly onlooker was curious: “It can’t be just one gunman,” Roy Bartholomew said, “He must have help. He has to go to the toilet at some stage!”

Perhaps it seemed too surreal that a sunny mall bedecked in tinsel and Christmas lights could harbour anything more threatening than sunburn.

After all, in the eyes of many international holiday makers, Australia is a dream destination – not a terrorist target.

But on Monday, Sydney was targeted by at least one armed gunman, who terrorised the CBD and brought the nation to a standstill.

The casual, almost insensitive, response was perhaps a reflection of Australians’ blissful ignorance of the potential for serious attacks on home soil.

Feeling sick about the fact that my countrymen are showing up to a hostage crisis to take selfies, drink & yell racist slurs.

Esther Blank, a reporter with German television ZDF, asked questions about whether this siege would sour Australia’s tolerance to multiculturalism.

A former South African policeman, now a Sydney-based lawyer, said he’d left Johannesburg to get away from this sort of violence.

“But I always thought we’d see something like this once Australia joined the fight against ISIL,” Richard Shakenovsky said. Shakenovsky was a 19-year-old policeman posted to the Soweto riots in 1976. He witnessed atrocities, which still burn in his memory.

This morning on his way to work in the city his son texted him to warn him about the siege. His reaction was measured.

“In my experience – terrorists use rapid bomb attacks – not all-day sieges.”

We mustn’t jump to conclusions that this is the work of ISIL. It’s more likely to be an attention-seeking and disturbed loner.”