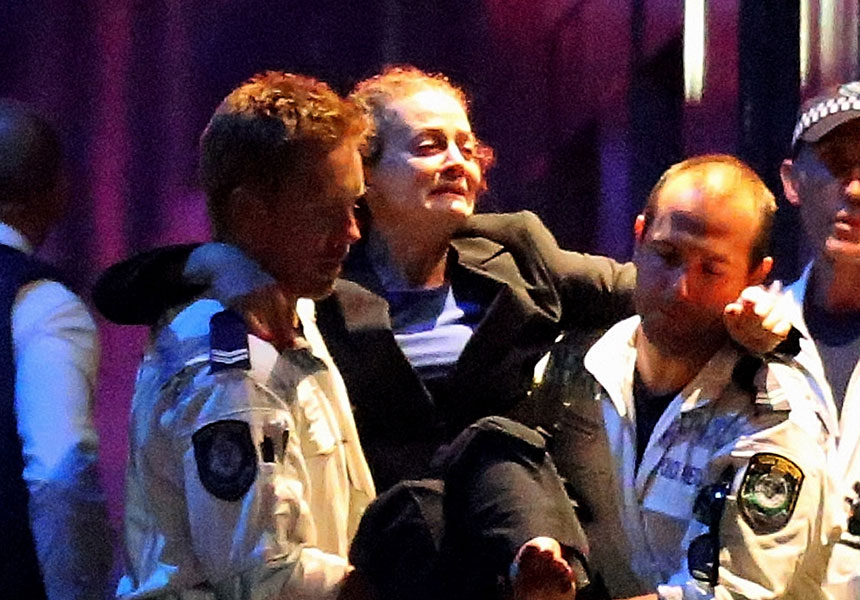 It is a single gunman is holding at least 20 people hostage inside the popular Lindt Cafe.

Mr Abbott said the motivation of the perpetrators was not yet known but there were “some indicators” the incident could be politically driven.

• Sydney in lockdown: what we know so far
• Martin Place siege an escalation in terror spate

The prime minister encouraged Australians to go about their business as usual on Monday, despite Sydney’s CBD being plunged into chaos as a result of road closures and train services being cancelled.

“The whole point of politically motivated violence is to scare people out of being themselves. Australia is a peaceful, open and generous society. Nothing should ever change that,” Mr Abbott said.

“That’s why I would urge Australians today to go about their business as usual”.

“This is a very disturbing incident. I can understand the concern and anxiety of the Australian people at a time like this, but our thoughts and prayers must above all go out to the individuals caught up in this.”

“I can think of nothing more distressing or terrifying.”

Mr Abbott confirmed the National Security Committee of Cabinet had met on Monday morning in regard to the hostage situation where a dozen people are reportedly being held.

“This is obviously a deeply concerning incident but all Australians should be reassured that our law enforcement and security agencies are well trained and equipped and are responding in a thorough and professional manner,” Mr Abbott said.

“I have spoken with NSW Premier Mike Baird and offered him all possible Commonwealth support and assistance”.

Opposition Leader Bill Shorten described the hostage incident as an “incredibly distressing situation” but said all sides of politics were united in keeping Australians safe.

“Our thoughts and prayers today are with the innocent people involved in this morning’s incident in Martin Place, Sydney,” Mr Shorten said in a statement.

“Our thoughts are also with their families who are seeing this incredibly distressing situation unfold, along with the rest of Australia.”

“I have spoken to Prime Minister Tony Abbott this morning and offered him the Opposition’s full support at this time.”

“Australians can be assured that we are one when it comes to keeping Australians safe.”

New South Wales Premier Mike Baird said his thoughts and prayers were with the public but had “full confidence” in NSW Police.

“All my thoughts and prayers are with those members of the public affected by the situation in Martin Place and the NSW Police who are trained to deal with these events,” Mr Baird said in a statement.

“I have spoken to Police Commissioner Andrew Scipione and have full confidence the NSW Police are working effectively to resolve the situation”.

PM: ‘Nothing more terrifying or distressing’