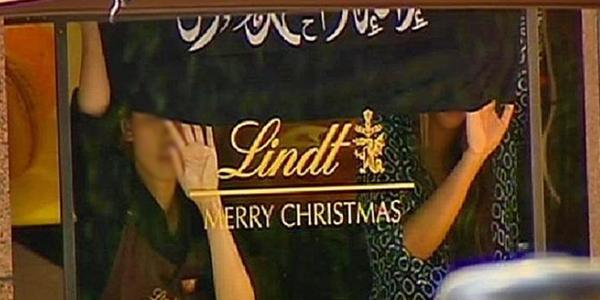 It is believed that at least one middle-aged man, possibly armed, has taken control of the Lindt cafe in Martin Place since approximately 9:30am and is not allowing those inside to leave.

The hostages, described by media at the scene as looking “terrified”, were seen pressed against a window of the cafe beneath a black-and-white flag, believed to be Islamic.

Monash University terrorism expert Professor Greg Barton has told the media that the flag, probably a Shahada flag, is not officially linked to ISIL, but that this does not rule out a connection to the extremist group operating in Iraq and Syria.

“[G]etting hold of an [Islamic State] flag would be quite difficult, and people will make do with what they have got,” Professor Barton told Fairfax Media.

The Arabic message that usually appears on such a flag translates as: “There is no god but Allah; Muhammad is the Messenger of Allah.”

This statement is a central belief of all adherents of the Islamic religion, but the flag has been also used by many jihadist groups.

Associate Professor Felix Patrikeeff, who teaches radicalisation and intelligence at The University of Adelaide, confirmed to The New Daily that it appears to be a Shahada flag, which has been “picked everywhere from the Islamic State to minor groupings of radicals in other parts of the Middle East”.

The flag could be representative of ISIL or any number of other splinter groups because “the lines are now very grey” between different jihadists, Associate Professor Patrikeeff said.

“They morph, they blend into each, and Islamic State has been instrumental in encouraging that,” he said.

Terrorism expert Dr Anne Aly, who researches public and policy responses to terrorism, told Channel 9 that the Shahada flag has been “hijacked” by terrorists around the world who are not true Muslims.

Security expert Tony Loughran suggested to Sky News that the flag may in fact represent al-Nusra Front, an Al Qaeda affiliate that often clashes with ISIL.

Australian National University terror expert Dr Clarke Jones told The New Daily that he is “not surprised” that an Islamic State-related incident may be unfolding on Australian soil, and said he holds “grave fears” for those inside the cafe.

Tactical police negotiators are reportedly on the scene.

Dr Clarke said these negotiators will try to speak with the men inside the building in order to resolve the incident peacefully.

“As terrible as this may sound, it is not surprising that this how now come up,” said Dr Jones, given recent decrees from Islamic State to its followers to attack Western countries including Australia.

“I have grave fear for those who are inside the cafe in the sense that acts like this, they want to encourage as much attention as possible in the name of Islamic State and I think it’s going to go down in a bad way. I hate to be pessimistic and I really feel for those people who are held inside,” he said.

“I’ve just come back from the global terrorism forum overseas, and we’ve been discussing these very issues about the likelihood of another attack.”

Dr Jones said the prominent location in Sydney’s business district is “very well chosen” in terms of publicity if this is indeed a terrorist attack, which has not been confirmed by police.

“In terms of the Islamic State, it’s a very public location and something that’s going to draw a lot of attention and international media attention. I imagine this will get around the world,” Dr Jones said.

Police raids in Sydney and Brisbane in September reportedly foiled a beheading plot that was intended for Martin Place.

Professor Barton told The New Daily that the “big question” is whether this purported terrorist attack, if indeed it is terror-related, will be an isolated incident or whether “we are going to see a wave of these lone wolf attacks in response to calls from Islamic State central”.

“It certainly brings home the threat and makes this very immediate. Until now, it’s been sort of abstract. It’s been immediate for the families that have been affected by their kids being taken away by recruits, but we haven’t had an at-home threat. That could change very quickly,” Professor Barton said.

Martin Place incident may be linked to ISIL