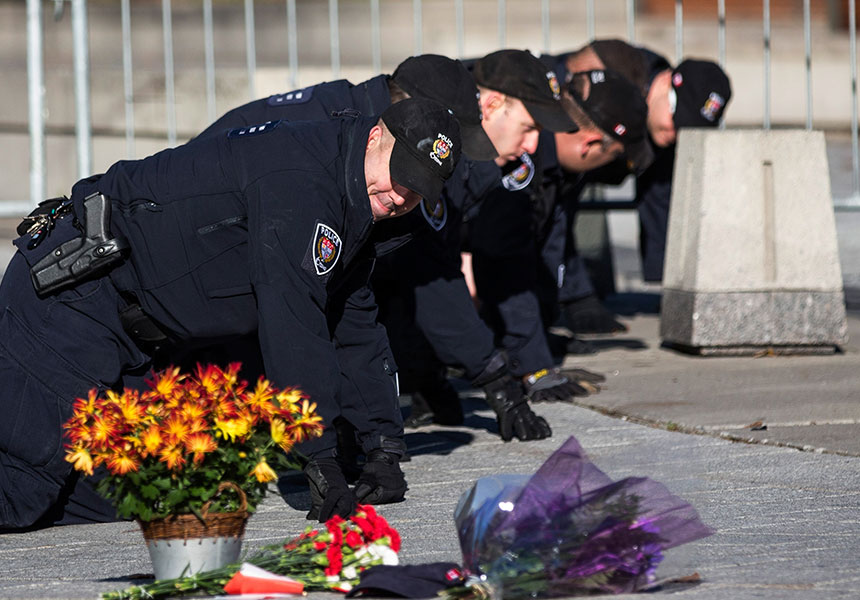 If the situation unfolding in Sydney’s Martin Place proves to be terror-related it would be just the latest in a string of attacks in western nations carried out by Islamic extremists.

While motivation remained unclear Monday afternoon, two gunmen were believed to be holding a number of people hostage inside the Lindt chocolate cafe in central Sydney.

At least two hostages were made to hold up a black and white flag in the window of the store.

The flag on display is understood to say in Arabic: “There is no God but Allah and Muhammad is the messenger of God.”

In September, a number of people with suspected links to Islamic State were arrested in pre-dawn raids across Sydney and Brisbane.

It’s believed the raids in 12 northwest Sydney suburbs, dubbed ‘Operation Appleby’, were pre-emptive, amid fears there were plans to carry out a series of attacks in Australia.

There has been a number of incidents so far this year involving religious extremists, although none on this scale.

Haider began associating with people who held radical Islamic views in the months before his death.

Last month in New York, Zale Thompson attacked police with an axe in Jamaica, Queens, leaving one in a critical condition before being shot dead.

It has since been revealed that Thompson was a radical Islamist who had visited websites dealing with ISIS, beheadings and jihad before the attack.

In October, Michael Zehaf-Bibeau gunned down a Canadian soldier standing guard at the country’s war memorial in Ontario before attempting to enter parliament. Zehaf-Bibeau was shot dead.

Again in October, a man ran over and killed one Canadian soldier, injuring another, in a car park in Saint-Jean-sur-Richelieu, Quebec.

Martin Rouleau Couture was “radicalised” according to police, and he led them on a chase before rolling his vehicle and being shot dead when he tried to exit.

On 24 May, a gunman shot dead four people at the Jewish Museum of Belgium in Brussels.

The attack is alleged to have been carried out by Mehdi Nemmouche, a 29-year-old French national of Algerian origin, who was arrested six days later and is still in custody.

Perhaps the most high profile attack was the murder of British Army soldier Lee Rigby, who was hacked to death by Michael Adebolajo and Michael Adebowale in Southeast London in May 2013.

Both Adebolajo and Adebowale were described as radical Islamists, and both are serving life in prison for the murder.