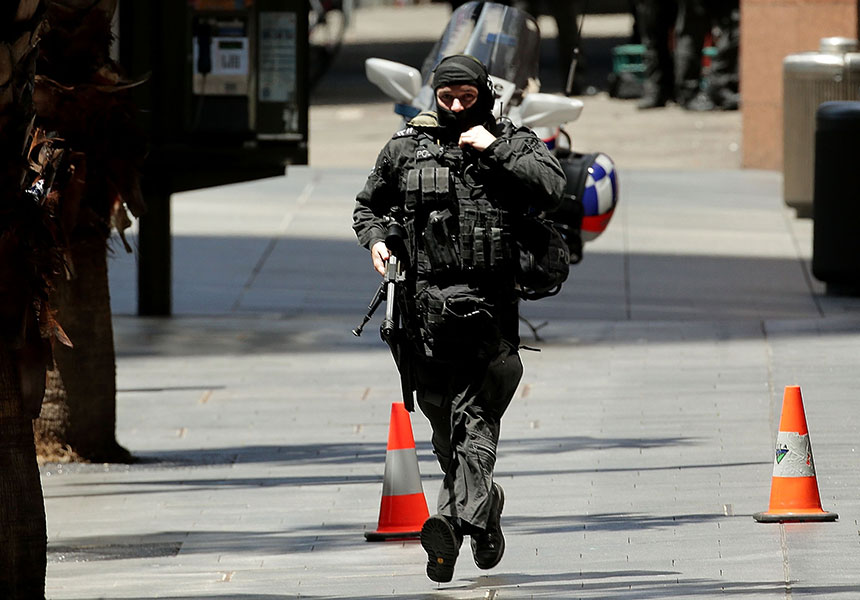 A man has been handcuffed 200m from the Martin Place cafe siege in central Sydney. A police officer has his foot on what appears to be a small black handgun.

The man was placed in the back of a paddy wagon near the Pitt Street intersection with Martin Place and driven off shortly after midday.

It’s unclear whether the gun was a replica or not.

The contents of the disoriented man’s bag were strewn on the ground.

At around 10am on Monday, at least a dozen people were believed to have been taken hostage inside the Lindt Chocolat Cafe in Sydney’s Martin Place. An Islamic flag was pressed up against one of its windows.

But Lindt Australia CEO Steve Loane estimates there are up to 50 people being held.

“The best information is that there’s like 40 or 50 people in there, customers and employees included. That’s a rough figure,” he told News Corp Australia.

Shop customers and workers were seen with their arms in the air inside the cafe.

The area around the cafe has been cordoned off to about 150m with specialist police operations officers poised outside the shop.

Parts of the Sydney CBD were in lockdown while Prime Minister Tony Abbott convened a meeting of the national security committee of cabinet.

“This is obviously a deeply concerning incident but all Australians should be reassured that our law enforcement and security agencies are well trained and equipped and are responding in a thorough and professional manner,” Mr Abbott said.

The Sydney Opera House was evacuated following reports of a suspicious package.

Macquarie Radio has reported an alleged gunman has told negotiators he has “devices all over the city” and wants to “speak with the prime minister live on radio”.

The flag being displayed appears to be the Shahada flag which carries in Arabic the Islamic testimony of faith affirming belief in the oneness of God and the acceptance of Mohammed as his messenger.

While it’s a religiously significant flag respected by mainstream Muslims around the world, it has also been recently adopted by extremist groups such as the al-Qaeda linked al-Nusra Front which is active in Syria and Lebanon.

Security agencies believe there are Australians in Syria fighting for the terrorist group.

There are about 200 bystanders between Martin Place and Castlereagh Street watching anxiously.

Workers trapped in buildings inside the police cordon have been told to stay away from the windows.

Justin Doyle, who works in a legal office inside the cordon, said colleagues were “all very scared”.

“Police have told them to stay where they are and do as they’re told,” he said.

Around 11.50am, police officers placed a ladder up against a window on the first floor of an office on the Elizabeth Street side of the same building. People then began climbing out onto an awning.

Martin Place is home to several prominent buildings, including NSW Premier Mike Baird’s office, the Reserve Bank of Australia, Westpac Bank and the Commonwealth Bank headquarters as well as the US embassy and Network Seven.

The Supreme Court, Sydney Hospital, NSW Library, NSW parliament are all located nearby.

“All my thoughts and prayers are with those members of the public affected by the situation in Martin Place and the NSW Police who are trained to deal with these events,” NSW Premier Mike Baird said.

“I have spoken to Police Commissioner Andrew Scipione and have full confidence the NSW Police are working effectively to resolve the situation.”

A spokesman for Deputy Prime Minister Warren Truss said the airspace over the CBD had not been shut down.

“There are choppers in the air and air traffic is being rerouted according. At this stage no impact on the air traffic network,” he said.

“If there’s something that the Australian Muslim community can do to assist, we are there,” he told ABC.