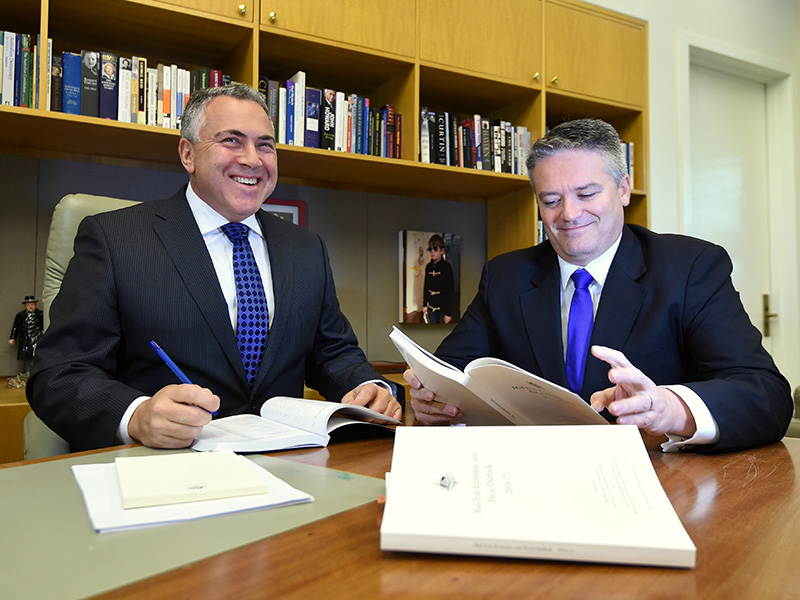 Joe Hockey’s budget update shows that he expects to collect enough money from taxes on superannuation that it will offset the loss of revenue from other taxes.

The mid-year statement confirmed that the government collected $6.1 billion from superannuation members last year. But it expects to milk $11.3 billion in 2018, which equates to a 90 per cent increase in revenue from super taxes.

The projected rise is remarkable. The government’s total take from all taxes is forecast to rise by only 30 per cent during the same period.

• Joe Hockey delivers ballooning debt and deficit
• Hockey has some growing up to do: comment

According to the mid-year statement, superannuation is now the fastest growing source of tax revenue for the Commonwealth.

No other tax category is expected to grow revenue for the government by more than 50 per cent before 2019. There are a few ways you can read the government’s expected tax windfall from superannuation.

It might reflect an optimistic view of where the economy is headed.

If the tax forecasts are based on an assumption that the workforce and national incomes will grow in the next four years, then the figures might be construed as a positive outlook for the economy.

More people in jobs means more super contributions flowing through the retirement savings system. When this happens the total revenue collected from taxes on those contributions goes up. Nothing wrong with that – in principle.

The forecasts might also be a signal that super funds are about to generate big returns to members on the back of a sustained rally in local and overseas sharemarkets.

Everyone wins under such scenarios.

The dark side of the numbers

However, with the economy now growing at less than three per cent, a level not likely to make inroads into unemployment, there might be a dark side to the super tax forecasts.

Many super funds are concerned that the forecasts reflect an attitude within the Abbott government that the existing tax arrangements for superannuation will change.

In other words, the government might be considering proposals to reduce the tax concessions on superannuation contributions.

At the moment, the concessional tax rate on compulsory super contributions made by employers is 15 per cent. That’s way below the tax rates paid by average income earners.

The government could increase its tax take simply by increasing the rates on super contributions. The other option might be to hike the special concessions that super funds enjoy on dividend imputation.

This would reduce the tax benefits that super funds can claim from the tax office with the effect of reducing returns to members.

Former Treasurer Peter Costello signalled this change might be in the pipeline last month, when he told a superannuation conference in Melbourne that such a reform would be canvassed in the government’s soon-to-be-released tax whitepaper.

It is difficult to see how the government can expect to double the tax dollars it collects through super funds on the current trajectory of the Australian economy.

Moreover, if the economy continues to expand at modest rates, pressure will mount on Treasurer Joe Hockey to find other ways to meet his tax targets.

Prudent superannuation members should brace for tax increases, and even new taxes, as the Abbott government refocuses public debate on taxation in 2015.