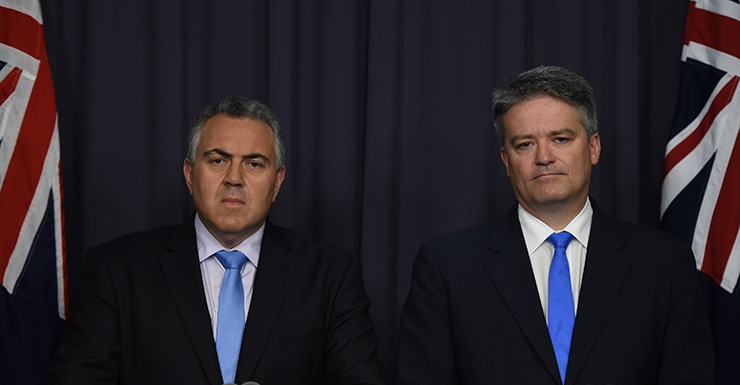 Treasurer Joe Hockey is expected to reveal revenue has taken a further hit of $6.2 billion in just over six months.

Mr Hockey will deliver his midyear economic update on Monday, amid reports of a forecast of $379.5bn in receipts following a figure of $385.7bn in May.

Fairfax Media says the outlook will point to tens of billions of dollars in lost revenue over the next four years as a result of falling commodity prices.

• Joe Hockey has some explaining to do
• Labor holds an election-winning lead: poll

News Corp Australia says deficits over the period will almost double to $100bn, signalling little hope of economic improvement without unpopular reforms to taxes and spending.

Mr Hockey warned on Sunday of job losses and an end to Australia’s prosperity ahead of the update, with plummeting iron ore prices the chief cause.

Prices have dropped to $60 a tonne – halving in a year – with the resultant fall in the terms of trade the largest since records were first kept in 1959.

“If we don’t use the budget as a shock absorber for this extraordinary fall in the terms of trade, then Australians will lose jobs and we will lose our prosperity,” Mr Hockey said.

The mid-year statement will show the economy growing at about 2.5 per cent, strengthening to three per cent over the next few years, he said.

However, it will also forecast unemployment to increase further, “to levels that are a tick higher than what we forecast in the (May) budget”.