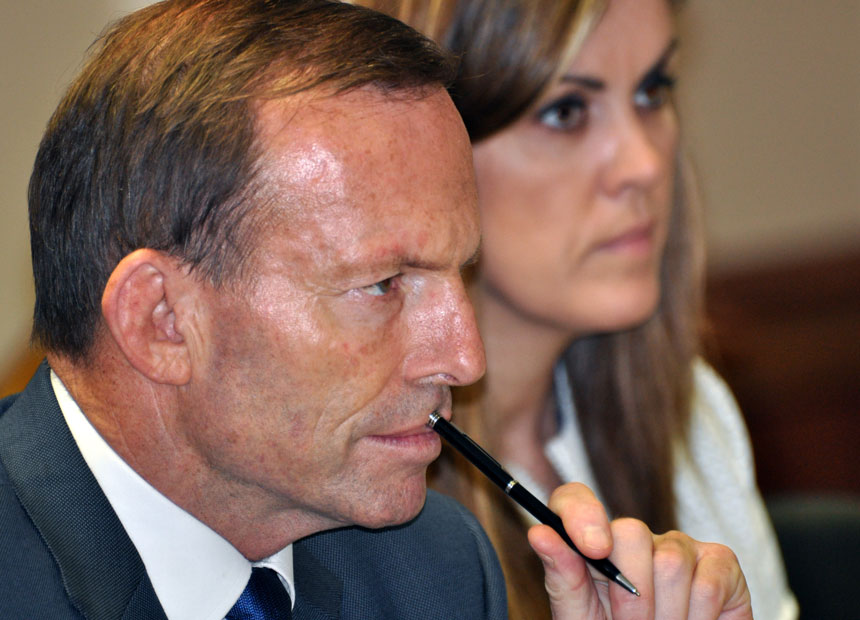 Among the options being touted as ways for Prime Minister Tony Abbott to deal with his “Peta Problem”, one is the suggestion that his contentious chief of staff Peta Credlin be moved to a seat in the Parliament.

On the face of it, the Peta for Parliament option appears to be a win-win scenario; it would allow both Mr Abbott and Ms Credlin to save face while defusing the escalating furore caused by her continued presence in the PM’s office.

The rationale for such a move recognises Mr Abbott would never want to be seen reprimanding the person he considers most instrumental in getting him elected.

Moving Ms Credlin to a parliamentary position could be cast as recognition of her apparently prodigious political talents instead of the best way to demolish the fortress she’s accused of constructing around the PM.

Ironically, by most accounts Ms Credlin could make an excellent MP. With qualifications in law, knowledge of a range of policy issues, and a strong political pedigree from having worked for a number of ministers and Liberal leaders, she is smart, articulate, and according to those who know her, fiercely loyal and charming.

We could do with a few more potential parliamentarians offering such a complete package.

There is the question, of course, whether Ms Credlin would accept such a transition. She has been quoted as saying she’s not interested “at this time”. These words make it clear that Ms Credlin might entertain the prospect of a parliamentary career sometime in the future.

How she would handle the move is another matter. The Parliament is chock-full of former political staffers and former party officials, but very few have served as chief of staff, and even less to a party leader.

One is the current Trade Minister, Andrew Robb, who was chief of staff to Liberal Opposition Leader Andrew Peacock before becoming Federal Director of the Liberal Party. Another is stood-aside Assistant Treasurer Arthur Sinodinos, who was PM John Howard’s chief of staff for nearly a decade.

And then there is former PM Kevin Rudd, who was chief of staff to Queensland Premier Wayne Goss before being appointed as Director-General of the Cabinet Office.

This last example is fascinating because of the parallels recently drawn between the operating styles of both Mr Rudd and Ms Credlin. Their shared preference for command and control operations in the Prime Minister’s office is said to have resulted on both occasions in ad hoc decisions, poor communication and operational gridlock.

Even if Ms Credlin did make the transition to Parliament she would of course have to bide her time on the backbench, before being considered for the ministry. She would also have to jostle for that recognition with several other talented backbenchers.

It’s likely a number of those backbenchers are among the “Liberal sources” currently complaining to the media about Ms Credlin’s style.

Ultimately, she would have to become a senior Cabinet minister before attaining anything near the power she has now. This may not matter if public service is her motivation rather than the consolidation and use of power.

It would nevertheless be a challenging transformation, moving from being the right hand of arguably the most powerful person in the country, to a servant of the people.

Even if Ms Credlin was prepared to give up one of the most powerful jobs in the country for the life of a modest backbencher, she may not find a seat or get the party member support necessary to do so.

In recent days the PM has publicly defended Ms Credlin against unhappy MPs by suggesting their complaints are sexist and without foundation. In doing so, Mr Abbott has sparked an unnecessary civil war, or a skirmish at least, and thereby created the setting for electoral disaster.

Voters expect to see unity within their elected governments and will punish those they see as divided.

Whether Mr Abbott convinces the Victorian Liberals to find a spot for Ms Credlin, or manages to get her to change her operational style, he needs to restore peace within government ranks as soon as possible.

Otherwise, the party unrest caused by his “Peta Problem” will have consequences right up until election day.

Why the Prime Minister’s Peta problem is not going away