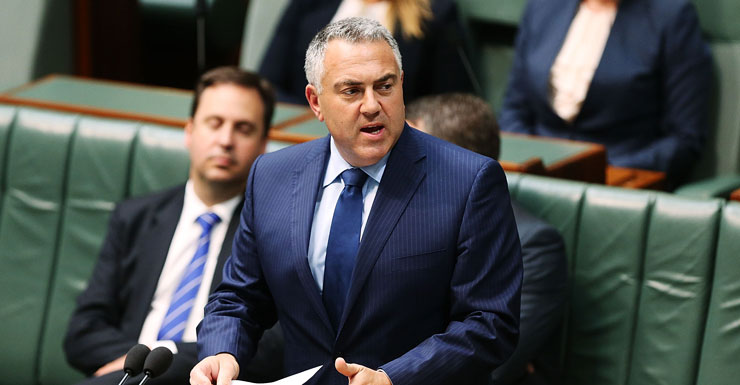 Mr Hockey will hand down the Mid-Year Economic and Fiscal Outlook (MYEFO) on Monday but has flagged that it will show unemployment rising to levels higher than forecast in May.

He said the update will also show growth is expected to remain around 2.5 per cent and strengthen to three per cent over the next few years.

“The government has decided to use the budget which is stronger than it was 12 months ago as a shock absorber for the biggest fall in our export prices in many years,” Mr Hockey said.

“If we don’t use the budget as a shock absorber then Australians will lose jobs and we’ll lose our prosperity.”

The Treasurer said in May iron ore prices were estimated at about $92 a tonne and Monday’s budget update will bring that down to about $60 a tonne.

“We have had the biggest fall in the terms of trade in more than half a century, but we are coping and we’re coping well because we strengthen the budget, because we put in place reforms that have helped to make us a more prosperous nation,” he said.

“Without change we are going to weaken ourselves, therefore, we have to undertake economic reform to strengthen the Australian economy, to make us more robust to meet head on the challenges of the future.”

Mr Hockey indicated he was prepared to announce bigger budget deficits rather than make deeper cuts in Monday’s update.

“It is important that we allow the budget continue to be a shock absorber and I say to the Labor party, the Greens and Independents: if you want to see the Australian economy cope better with the challenges that are beyond our control work with us to strengthen the Australian budget,” he said.

Labor’s treasury spokesman Chris Bowen said the government was making “pathetic excuses” and the Treasurer had “lost control of the budget”.

“The collapse in consumer confidence, the growing unemployment queues, the fall in employment growth have all occurred since Joe Hockey’s budget,” Mr Bowen said.

“This has occurred not only his watch, but after his budget.”

Finance Minister Mathias Cormann has signalled 175 agencies will be scrapped to save $500 million over four years, saying the government wants to streamline agencies and avoid duplication.

Groups to be axed include the Diabetes Advisory Group, Anzac Centenary Public Fund Board and the Local Government Ministers Forum.

Other groups set to be abolished are the Vietnam Veterans’ Education Centre Advisory Panel and a medicines and therapeutic advice group for veterans.

“[It’s] crass stupidity. Whoever is advising the government on this has no concept of reality,” Mr Ryan said.

“Why is the government cutting a program that in the long term saves money and what on earth do they think they’re going to replace it with?”

Thousands of Canberra public servants face a nervous wait to learn if their jobs will be axed as part of the proposed cuts.

Nadine Flood from the CPSU, the union representing public servants, said the latest cuts were bad news for workers before Christmas.

Budget will be a ‘shock absorber’, says Hockey