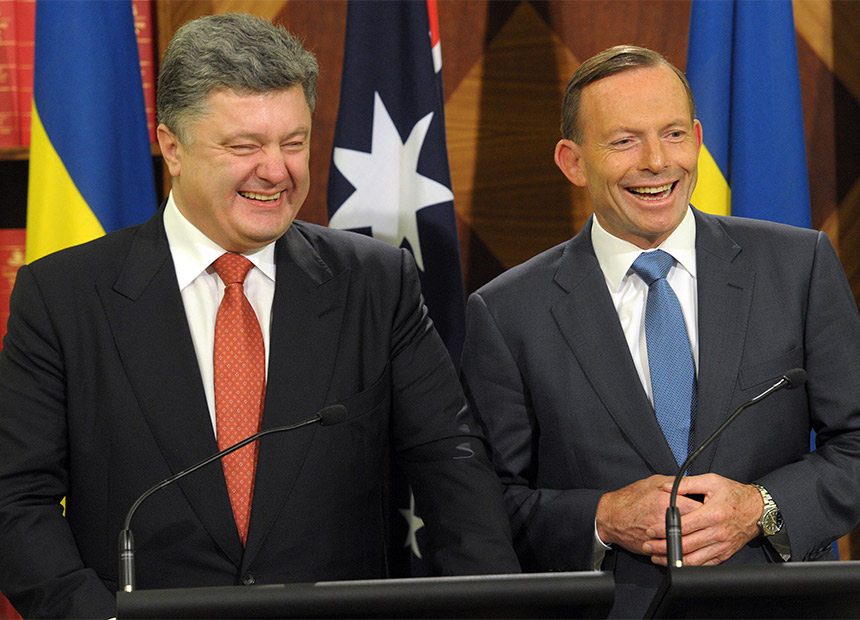 Ukrainian President Petro Poroshenko raised his country’s energy security needs with Prime Minister Tony Abbott when the pair met in Melbourne on Thursday for talks focused on the MH17 disaster.

“There is the possibility for Ukraine to buy Australian uranium for our nuclear power stations,” he told reporters.

Energy security is a vital issue for Ukraine, which relies heavily on its hostile neighbour Russia for gas and has difficult shoring up supplies of uranium and coal.

Mr Abbott said Australia was an energy superpower and wanted to help Ukraine address its vulnerabilities.

Any uranium sales to Ukraine will prove controversial given the legacy of the 1986 explosion at the Chernobyl nuclear power plant, about 100km from the capital Kiev.

It remains the worst nuclear accident in terms of lives and cost in history.

The Abbott government has put uranium back on the agenda, formalising a deal with India in September to sell yellow cake for civilian energy needs. And unlike India, Ukraine is a member of the Nuclear Non-Proliferation Treaty.

But energy was not the only issue on the agenda when Mr Abbott met his Ukrainian counterpart for bilateral talks.

The MH17 disaster loomed large, with both leaders determined to see those responsible for the tragedy brought to justice.

Mr Abbott reaffirmed his support for Ukraine in its fight against pro-Russian rebels, and hoped one day an Australian leader could unveil a monument for the MH17 dead in the east of the country.

“I do hope that when that time occurs that will we be able to do in a Ukraine which is free, prosperous, peaceful and united,” he said.

President Poroshenko thanked Australia for its ongoing non-lethal support for Ukraine’s military, adding Mr Abbott was “one of the most popular foreign politicians” in his country.

“It’s nice to be popular, even if only in Kiev,” Mr Abbott quipped.