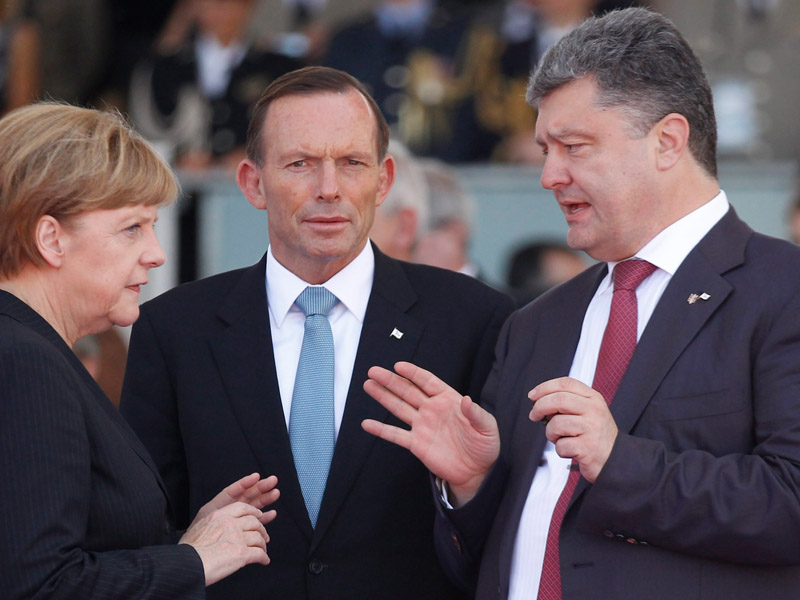 Australia and Ukraine have taken the next step in cementing their “strong and enduring friendship” following the MH17 tragedy, with the first visit of a Ukrainian president to Australia.

In Melbourne with Tony Abbott, Ukrainian President Petro Poroshenko thanked the Australian government for its support following the aviation disaster which killed 283 people, including 27 Australians.

• Ukraine is ‘ready for total war’: Petro Poroshenko
• ‘Who would have thought … this could happen’

Mr Poroshenko said he made a phone call to Mr Abbott immediately after the plane was shot down in Ukranian airspace, saying “out of all nations who have suffered, it is Australia who has suffered one of the most”.

Mr Abbott said he would offer as much personal guidance to the Ukrainian leader as he could, as Ukraine faces the external threat of Russian backed rebels.

“Ukraine is certainly a distant country but the MH17 atrocity has brought our countries together in remarkable way. You never know what’s around the corner,” Mr Abbott said.

“I want to assure him that as a free country, Australia feels deep solidarity with the free country of Ukraine and wishes to do whatever we can to support Ukraine”.

“I believe that there are few, if any, democratically elected leaders that face as many challenges as Petro Poroshenko”.

Mr Abbott said fighting in Ukraine was an opportunity for Russian president Vladimir Putin to be a statesman, and called for Russia to stop supporting rebels in Ukrainian territory.

“I would say to Mr Putin that this is an opportunity to be statesmen as well as patriot.”

“We will all advance together, or none of us will advance at all.”

Mr Poroshenko invited the prime minister to visit the Ukrainian capital of Kiev, saying he was one of the most popular foreign leaders in Ukraine.

Facing historically low approval polls, Mr Abbott laughed, saying it was “nice to be popular, if only in Kiev”.

President Poroshenko’s two-day visit begins on Thursday and takes him to Canberra, Sydney and Melbourne.