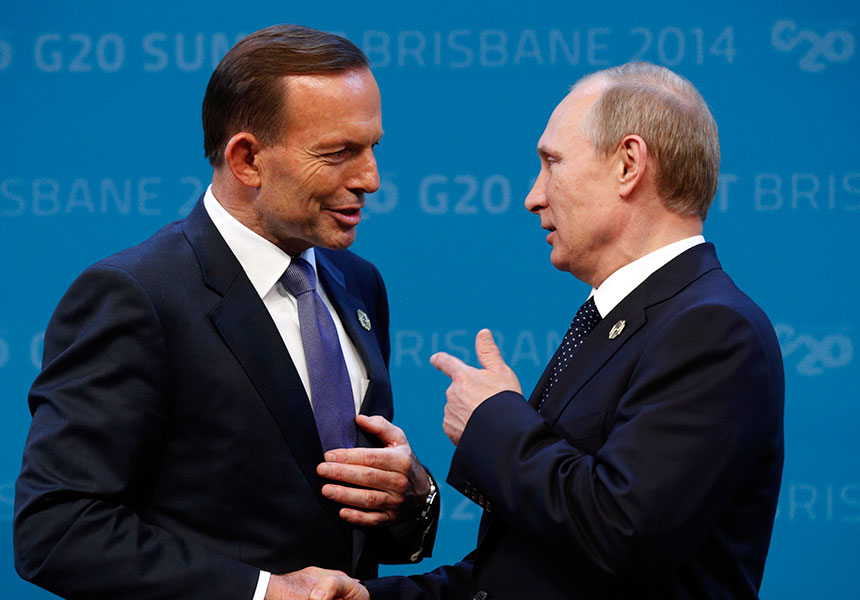 Once they worked out what he meant, the word was quickly adopted by world leaders, commentators and comics.

• The official word of the year for 2014 is …
• Shirtfronts, sauce bottles: our pollies need to get real
• Beyond ‘selfies’: the modern lingo you need to know

Perhaps not surprisingly, “shirtfront” has been named as Australia’s word of the year by The Australian National Dictionary Centre.

“Look, I’m going to shirtfront Mr Putin … you bet you are, you bet I am,” Mr Abbott said in October.

Amanda Laugesen is director of the centre, which is based at the Australian National University.

“We selected shirtfront because we saw it really dominated the media this year,” she said.

The Prime Minister had a serious point to make, that Mr Putin should be held accountable for Russia’s reputed role in the downing of Malaysia Airlines flight MH17. Dozens of Australians were among the dead.

Instead, the term shirtfront soon had a life of its own.

“Only last month your foreign minister strayed across the room towards me at a summit in Italy,” Mr Cameron said.

“I wondered for a moment whether I was heading for what I’m told we now need to call a shirtfronting,” he said, to laughter.

“Maybe this is Prime Minister Abbott’s way of shirtfronting you,” Mr Modi said, also to laughter.

Ms Laugesen and her colleagues have come up with an official definition for this distinctive Australian verb.

“We’re defining it at the moment as to challenge or confront a person,” she said.

Other popular phrases include ‘Team Australia’ and ‘man bun’.

“We thought it was an interesting use of ‘Team Australia’,” Ms Laugesen said.

“It’s been around in sporting contexts for a couple of decades, but Tony Abbott is obviously using it in a very particular political context and we’ve seen it be picked up across the media and being referred to.

“So we thought it was quite an interesting term; again, another Australianism.

“It will be interesting to see whether it sticks around or whether it’s fairly ephemeral.”

Mr Abbott’s use of the word changed over time. Initially he suggested that Muslims be part of “Team Australia”, then used the term to encourage agreement in the Parliament.

“I think it was the one that we had the greatest challenge [to define],” Ms Laugesen said.

“At the moment we’re using it to refer to a person who supports Australia and its values as being on Team Australia.

“But it is a tricky one to challenge and I think we probably want to see, certainly in the political context as opposed to being part of a sporting group … how it plays out, if it sticks around in the media in terms of how we’ll define it.

The shortlist for word of the year also included “Ned Kelly beard” – the full bushranger-style beard sported by many young men.

Ms Laugesen said another widely discussed word in 2014 was the top knot known as the “man bun”.

“A man bun is basically just a bun that you put in your hair, you draw your hair back at the back of your head, but it’s being adopted by men,” she said.

“It’s been quite popular in the last year, a number of celebrities have been sporting this style.

“We’ve also seen the shortened form ‘mun’, which is a pretty terrible word.

“But that’s also been used and I know some young people who use the term ‘mun’.”

‘Shirtfront’ is Australia’s word of the year