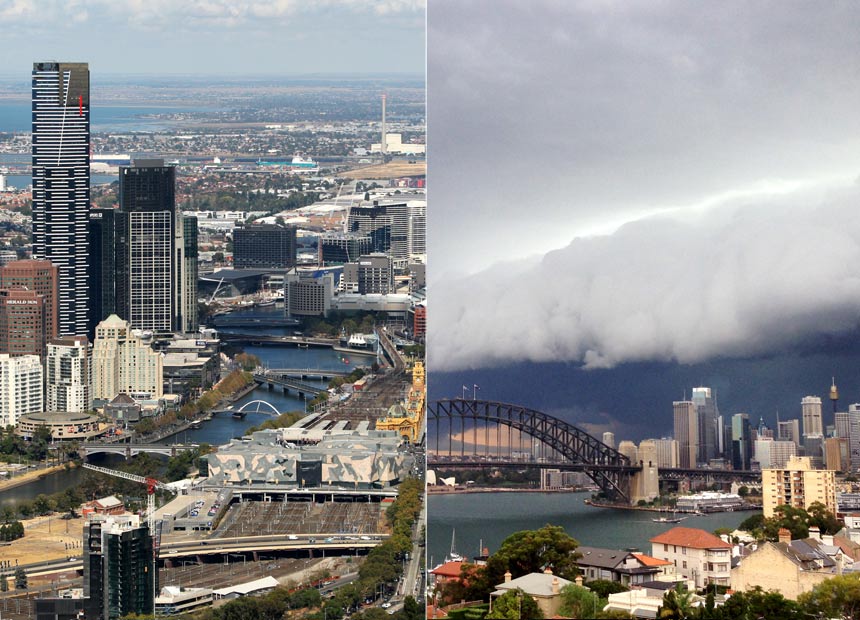 It’s an age-old rivalry and the competition between Melbourne and Sydney is only just heating up.

According to new research, Melbourne is gaining ground on Sydney thanks to a booming population.

• Sydney to get 67m-long trams
• Lonely Planet names 2015’s must-visit destinations
• What is the hot chip capital of the world?

According to Mark McCrindle from McCrindle Research, this is partly due to a change in the flow of people leaving and entering each state.

Melbourne has also been named the world’s most liveable city by the Economist Intelligence Unit’s liveability survey four years running.

And it isn’t Sydney’s only competitor – both cities face stiff competition from a burgeoning Brisbane and Adelaide.

Brisbane retains Australia’s most affordable housing as the only capital city with a median home price below $500,000.

Adelaideans, meanwhile, have received international attention for their cultural prowess, scoring a shout-out from the Lonely Planet travel guide on its list of the world’s top 10 travel destinations.

Despite this, the predominantly bi-city rivalry remains intact – for the time being, at least.

So why are Sydneysiders jumping ship and heading interstate? And what makes Melbourne the place to be?

We break it down:

One has four seasons in one day, the other is supposedly eternally warm.

In the case of each city’s climate, Mr McCrindle says the stereotypes are true.

“Probably the best measure of this is the number of clear days and Melbourne is definitely getting a lot more drizzle and overcast days.”

The trade-off for Sydney is more rain, with twice the amount of annual rainfall than Melbourne – a phenomenon evident over the past week with extreme weather bringing up to 30mm of rain in half an hour to some areas.

Melbourne’s iconic trams trundle down city streets and an extensive train and bus network is also in place.

However, Sydney is home to one of the most scenic forms of public transport – the ferry – and is set to get the world’s longest trams.

Surprisingly, more Melburnians drive to work than Sydney-siders, who are more likely than their southern counterparts to walk to work.

Cycling is still one of the top transport choices in Melbourne thanks to a flatter terrain and a number of bike paths in the CBD.

An aversion to driving in Sydney could be thanks to its horrendous traffic congestion, which was last year named the seventh worst in the western world.

Whether its due to spectacular water views or pure supply and demand, Sydney remains a pricey city to live in.

Thankfully, Sydney housholds earn more money on average than Melbourne households, allowing them to cover the average house price of $843,994.

“People in the outer suburbs of Sydney are realising they can head to Melbourne, live closer to the city, have a better lifestyle, stronger employment market and money left over,” Mr McCrindle says.

This is both a blessing and a curse because, as more people head south, the likelihood of Melbourne’s housing prices increasing goes up.

“The fact is that Melbourne is growing by more than ever, so it really has to plan for that,” Mr McCrindle says.

A small but incredibly crucial factor in determining a city’s prestige, coffee prices in Melbourne’s cafe-crazy culture are noticeably higher than Sydney’s.

You get what you pay for in Melbourne, however, with the city recently claiming the coveted title of “World’s Best Coffee” in a survey conducted by travel site Booking.com.

According to Mr McCrindle, that’s despite the obvious boost Melbourne receives from its wide array of international events, including the Australian Open tennis tournament and International Comedy Festival.

Sure, Sydney hosted “the best Olympics ever” in 2000, but Melbourne is home to more diehard sports fans.

“Because Melbourne hasn’t had the natural assets of Sydney, its had to work harder to develop the cultural infrastructure,” Mr McCrindle says.

As a result, Melbourne is recognised for its indoor culture, including unique shopping destinations, internationally-recognised restaurants like Vue de Monde and Attica and art galleries.

And the winner is…

Melbourne! With rapid growth, more culture and sport, better coffee and cheaper housing prices, Melbourne is certainly the more liveable, if less visually stunning, city. However, it’s worth noting that the real test will be over the coming years, as Melbourne’s transport and infrastructure attempts to grapple with an influx of people.

Where do the other states fit in?

The showdown in a nutshell

Melbourne vs Sydney: who wins the showdown?