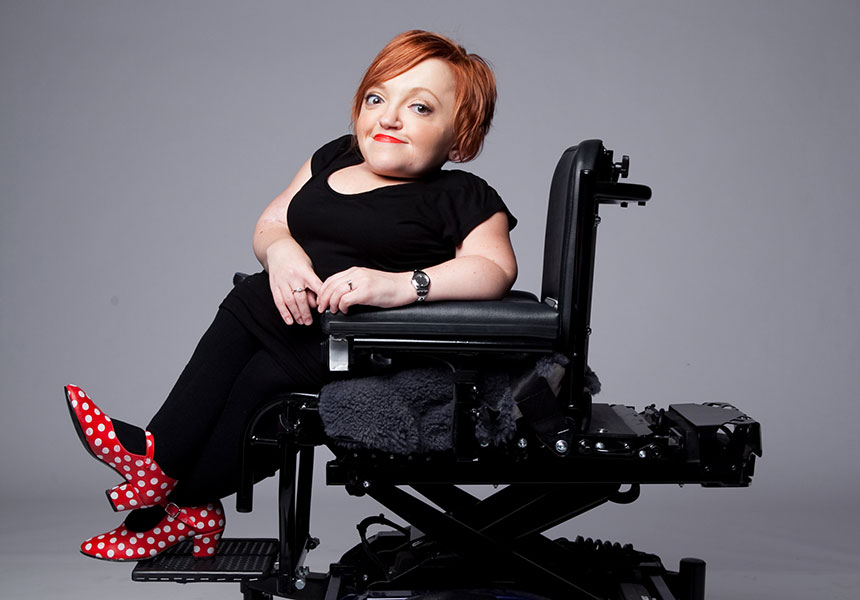 Writer, presenter, educator, comedienne and activist Stella Young has died at the age of 32, leaving behind an adoring fan base and an impressive CV in media and the arts.

Ms Young, who was born with osteogenesis imperfecta – or what she called “really dodgy bones”, used her quick wit and tempestuous debating strategy to advocate passionately for the issues she cared about.

Born in Stawell, Victoria, in 1982 to a butcher and hairdresser, Ms Young was fiercely independent early in life.

Ms Young said her perspective on her disability changed at the age of 17, when she had a revelation about her own existence.

From there, she moved to Geelong where she studied journalism at Deakin University, before completing a Bachelor of Education at Melbourne University.

“When I moved out of home, that was when I realised how hard the world is to navigate, and how much discrimination and dodgy attitudes are out there,” Ms Young told Mamamia.

Ms Young’s legacy lies in her successful career in both the media and comedy, hosting eight seasons of Australia’s first disability culture program No Limits, on Channel 31.

She later became editor of ABC’s disability news and opinion website, Ramp up.

Ms Young was a member of several organisations, including the Victorian Disability Advisory Council and Women With Disabilities Victoria.

In a tribute to Ms Young, ABC managing director Mark Scott called her “an unforgettable communicator and a passionate advocate”.

“Stella helped us understand disability issues by sharing with a raw honesty about her own life and forcing us to reconsider how we think about disability and create an environment where those with disability can best get on with their own lives,” Mr Scott said.

Speaking with the Victorian Women’s Trust earlier this year, the celebrated comedienne said she liked to “challenge what people think they know about disability”.

“People take one look at me and think they know things about my life based on stereotypes – they might assume I don’t have a partner, or a job,” Ms Young said.

“They might think I don’t live independently, or stay out late, or dance until the wee small hours of the morning.”

Stella Young, you were magnificent. You will be sorely missed.

“I want to live in a world where we don’t have such low expectations of disabled people that we are congratulated for getting out of bed and remembering our own names in the morning,” she said.

“We’ve been sold this lie that disability makes you exceptional. And it honestly doesn’t.”

In a poignant opinion piece written to her 80-year-old self just weeks ago, Ms Young said she didn’t think about dying.

“I promise to grab every opportunity with both hands, to say yes as often as I can, to take risks, to scare myself stupid, and to have a s**tload of fun.”

“See you in our hover-chair, lady.”