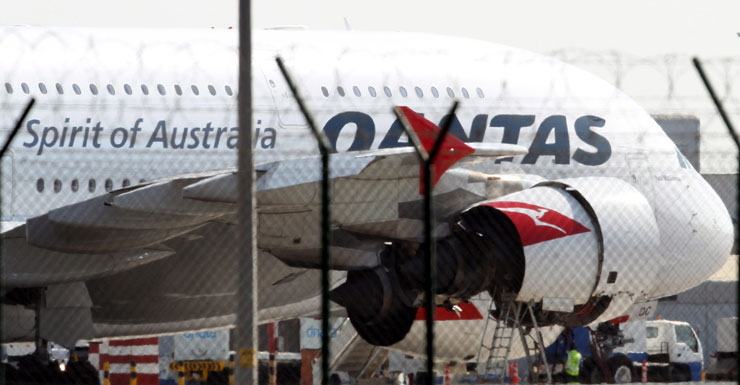 Passengers have been cleared after being assessed for possible fume inhalation when a Qantas plane was forced to return to Perth Airport after reporting a strange smell.

It is the second emergency incident at the airport on Monday.

The plane had taken off on a flight bound for Karratha but WA Police said the pilot made a request to return to the airport, and called for emergency landing protocols after smoke was detected in the cabin.

However, Qantas released a statement saying the return was prompted by an unusual odour in the cabin.

Police said QF904 landed safely shortly before 3:00pm, and taxied away from the main runway.

Emergency vehicles, including a number of fire engines, police cars and ambulances, rushed to the runway at the domestic terminal as the plane landed.

Passenger David Robertson said everyone on board remained calm throughout the incident.

“They just made the announcement that [there was a] strange smell around row five or six, and they’re just turned it back for precautionary reasons,” he said.

“I couldn’t smell [it], someone said it was similar to a kerosene smell and someone else said it was like a dry cleaning smell.”

Mr Robertson said there appeared to be a handful of people feeling unwell and arrangements were made for them to be assessed when the plane landed.

A St John Ambulance spokesman said up to 80 people were assessed over concerns about smoke inhalation after the landing.

It has now said those passengers have been cleared and nobody was taken to hospital.

A spokeswoman for Perth Airport said the regional plane returned after a warning system lit up.

Qantas said the 737 aircraft will undergo an engineering inspection to try to locate the source of the smell.

It said the flight landed normally.

Earlier on Monday, a Qantas A380 passenger jet travelling from Dubai to Sydney was diverted to Perth after the air conditioning developed a fault when the plane was above the Indian Ocean.

“As a precaution the aircraft descended to 10,000 feet and the captain requested a priority landing,” Qantas said in a statement.

Meanwhile, late on Monday night a Qantas plane on its way to Dallas was forced to return to Sydney after about four hours in the air due to a technical issue that impacted seat power, the in-flight entertainment system and some of the toilets.

A Qantas statement said that although the aircraft could have continued flying safely to Dallas, “the decision was made to return to Sydney in the interests of passenger comfort on what is a long flight”.

“We’ve sincerely apologised to our customers for their patience and understanding for what was a frustrating experience,” the statement said.

Customers have been booked on another flight to Dallas on Tuesday morning.