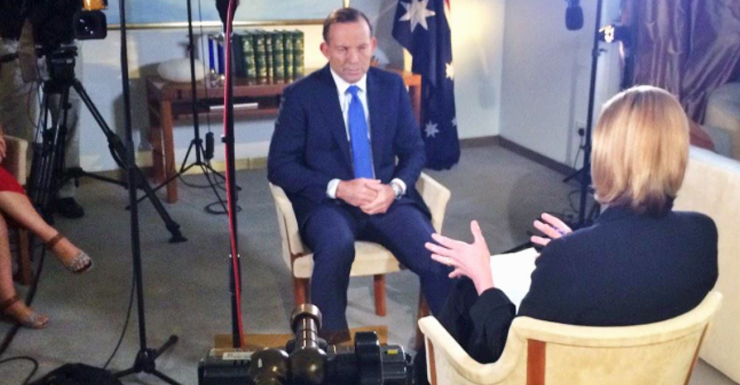 ABC’s 7.30 host Leigh Sales has been labelled “soft” for giving Prime Minister Tony Abbott an “easy ride” during an interview on Thursday night.

Mr Abbott said he would “probably” reshuffle his cabinet before the next election, but Sales didn’t press the issue, instead allowing him to go on and praise his staff.

The Walkley Award-winning journalist’s name immediately began to trend on Twitter as viewers accused her of giving a ‘fluffy’ interview with “no brakes applied”.

Who would have thought that Karl Stevanovic does has more hard hitting journalism than Leigh Sales LOL #abc730 — Peak Idiocracy (@geeksrulz) December 4, 2014

7.30 viewers also accused her of bias.

And as predicted @leighsales gives Abbott the lightest and fluffiest of interviews. Allowing him to go on and on, no brakes applied #abc730

I wonder if @abc730 submitted questions to @TonyAbbottMHR before the interview. He got an amazingly easy ride from @leighsales #auspol

To the delight of Twitter users, an inappropriately-timed alarm also went off in the parliament building when Mr Abbott began discussing his budget with Sales.

Some joked the alarm was a “budget emergency alarm”.

Others suggested it may have been Mr Abbott’s chief of staff, Peta Credlin, ringing the fire alarm to try and get him out of the interview.

#abc730 was that the budget emergency alarm going off??

Leigh Sales slammed for being ‘soft’ on Abbott