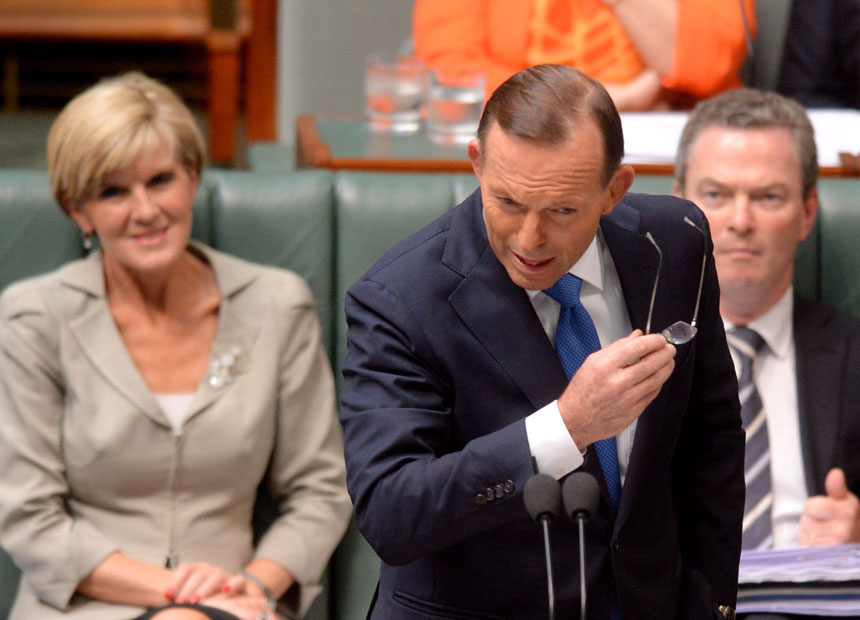 Labor and the government have ended the final question time for the year exchanging blows over the federal budget.

However, the sitting was extended to Friday after a reported last-minute deal with six Senate crossbenchers to legislate temporary protection visas for asylum seekers.

Seven Labor MPs were thrown out of question time as the opposition railed against budget cuts, including pension indexation changes and a rise in the pension age to 70, which the government was poised to bring on for debate on Thursday night.

The pension changes are expected to face a tough ride through the Senate in 2015.

Urging Australians to spend up this Christmas to boost the economy, Treasurer Joe Hockey told parliament Labor needed to take a “more mature and collaborative approach” as an ageing population put pressure on the budget.

The government will release the Intergenerational Report, containing 40 years of budget projections, early next year, he said.

“It will show that as Australia’s population ages, labour force participation will fall,” Mr Hockey said.

“Without economic reform this will slow the economy, reduce growth in the government’s revenue base, and create additional demands on government spending, particularly in health, aged care and pensions.”

The treasurer said he did not want to see periods of decline in living standards, but the risk of this was “real”.

“All of the government’s actions are being taken with these risks in mind,” he said.

Labor leader Bill Shorten said the coalition’s economic record was dismal, doubling the deficit after coming to power in 2013, then “colluding” with the Greens to get rid of the debt ceiling.

“I don’t believe there’s a single Australian who is not disappointed by the Abbott government,” Mr Shorten said in a summary of the political year.

Prime Minister Tony Abbott said the government was taking the difficult, but necessary decisions to balance the budget and pay off debt.

“This leader of the opposition is someone who is trashing the country to help himself,” he said.

On Thursday night, the government was poised to get a bill through the Senate to reintroduce TPVs and a new class of visas for asylum seekers who work or study in regional areas.

However, the coalition cut its losses on a $1.3 billion budget saving, dropping a plan to increase the Pharmaceutical Benefits Scheme co-payment by $5 for general patients and 80c for concession card holders from January 1.

Labor, the Greens and crossbenchers declined to back the co-payment.

Health Minister Peter Dutton said the coalition would press ahead with legislation in 2015, in a bid to ease pressure on the scheme which costs more than $9 billion a year.

Asked by Labor whether co-payments were a broken election promise, Mr Abbott told parliament he had never ruled out co-payments.
“Co-payments are a part of our system,” he said.

“It’s like a dog fight in the fog – loud, noisy, furious and the targets are shadowy … (but) we’ve achieved very well,” he said.