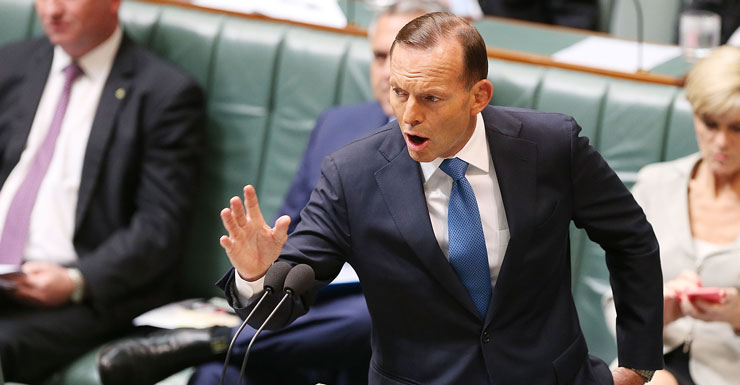 Prime Minister Tony Abbott has entertained the idea of a Cabinet reshuffle, in an interview with the ABC’s 7.30 program.

It comes as Labor applies more pressure on Mr Abbott to sack his Defence Minister David Johnston following allegations the minister and his chief of staff spent thousands of dollars on meals and wine for industry players, who were seeking government contracts.

An investigation is now underway by the Defence Department into the leaking of Senator Johnston’s hospitality receipts.

Asked in the interview whether it was time to change his frontbench line-up Mr Abbott said, “At some stage between now and the next election, quite probably, but this is a good frontbench”.

Earlier on Thursday during Question Time, Mr Abbott refused to confirm whether Senator Johnston would still be the Defence Minister next year.

During his 7.30 interview Mr Abbott went on to sing the praises of other Cabinet ministers including Julie Bishop, Scott Morrison and Mathias Cormann.

“Scott Morrison has stopped the boats, everyone thought that couldn’t be done,” he said.

“Julie Bishop has had a stellar year as Foreign Minister.

“Mathias Cormann has been an outstanding Finance Minister, done magnificent work, unsung work negotiating with the crossbench in the Senate.”

“Joe Hockey has been criticised lately, but I tell you what, I think Joe is going to be one of the great treasurers because he’s someone who bounces back and that’s what he’s doing now,” he said.

Earlier in the interview Mr Abbott said that despite breaking some election promises, he had made good on his “core commitments”.

“I know not everyone would agree with me, but I would say that we have kept faith with the Australian people because we have fundamentally honoured the core commitments which were to stop the boats, to repeal the carbon tax, to build the roads,” he said.

John Howard’s formulation of core and non-core promises was not enough to avoid a backlash at the election after the tough 1996 budget.

But would Abbott himself consider stepping aside if the government continued to trail Labor ahead of the next election in 2016?

On ABC funding cuts, he said plainly he did say the night before the election there would be no cuts to the national broadcaster.

“We flagged a very urgent task of budget repair,” he said.

“It’s interesting that in the run-up to the budget, the messages we were getting back from our constituents and, yes, from Liberal Party polling, was people were frightened we would squib it,” he said.

Mr Abbott said he was saying to the Australian people there was a need to adjust to changed circumstances and the government was deadly serious about returning the budget to surplus.

“If you are trying to get from point A to point B and one way is blocked you find another way. You don’t abandon your objective,” he said.

Mr Abbott said he would not flag potential compromises to get stalled budget measures through the Senate.

“That’s going to be a matter for discussion and negotiation with the crossbench,” he said.

“There will be further things to be announced by this government. We will be governing right up until Christmas Eve.”