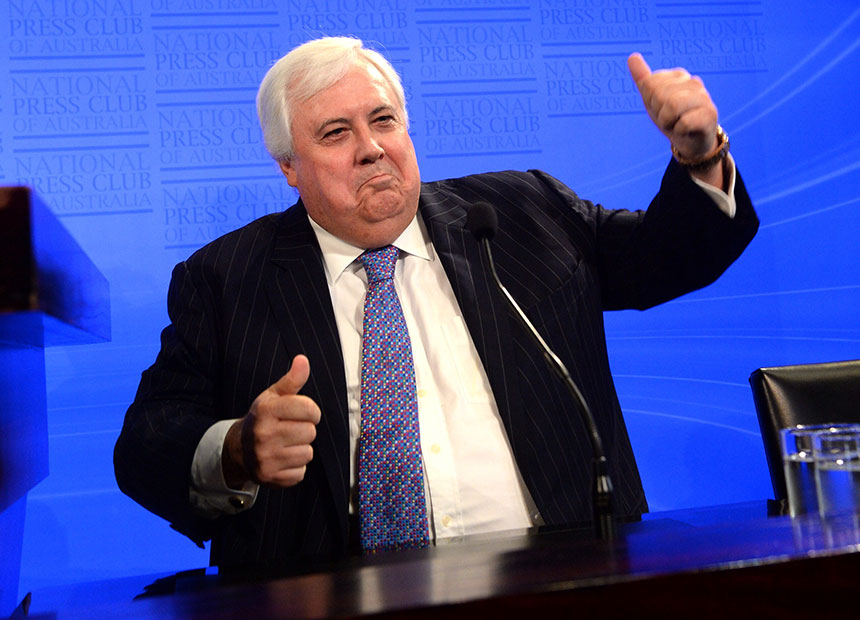 Palmer United Party leader Clive Palmer has clashed with journalists after making an address to the National Press Club, accusing a News Limited reporter of “wanting a promotion from Rupert [Murdoch]”.

Mr Palmer became exasperated when Courier Mail journalist Steven Scott asked the member for Fairfax about fraud charges brought against him by a Chinese-owned mining company in a Brisbane Court last week.

He became increasingly outraged at the line of questioning, speaking over the top of journalists and resorting to personal attacks.

Mr Palmer finished off by loudly repeating, “That’s not true” eight times as Mr Scott tried to finish his question.

Also asking questions were reporters from The Australian, The West Australian and Fairfax.

Mr Palmer also accused News Limited journalists of asking the same questions as one another, and dancing to the tune of media mogul Rupert Murdoch.

“Have some guts to [stand up to] Rupert, don’t do what he tells you from New York,” Mr Palmer said.

“Stand up and be a journalist. Don’t read off that, think of your own brain and think of a question.”

Mr Scott became exacerbated and said it was “ridiculous” when Mr Palmer kept interrupting him.

“You want a promotion from Rupert,” Mr Palmer retorted. “I’m not going to take rubbish from you, mate.”

Mr Scott reminded the politician he was there to answer questions from journalists, but Mr Palmer refused to answer any more questions on the court case.

“You haven’t got the guts to ask a question on the topic, because it’s beyond your intellectual capacity. Why don’t you admit it?” Mr Palmer retorted.

Mr Palmer has twice walked out of interviews with ABC television programs when probed on the breakdown of a relationship with a Chinese business partner and the resulting legal fight.