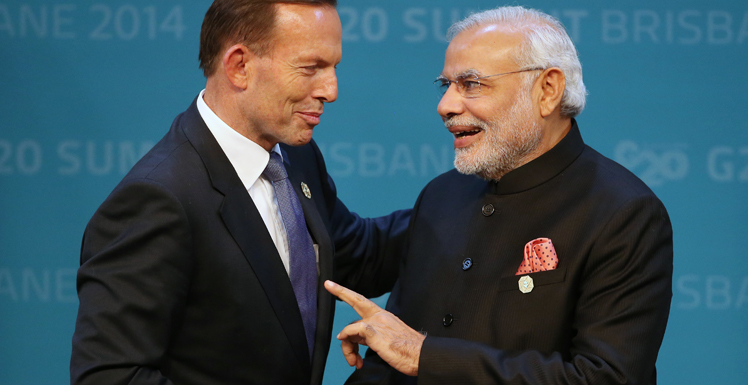 A quick glance at Tony Abbott’s Facebook page would suggest that the majority of the Australian prime minister’s fanbase resides in India.

Mr Abbott has seen a surge of around 7000 Facebook likes in the last few weeks, with the majority of his followers 18 to 34-year-olds hailing from New Delhi.

One of these things is not like the other. #NewDelhi #AusPol #likes pic.twitter.com/fkxs2OvZNL

Several news sites suggested the prime minister could be buying friends, accusing Mr Abbott of trying to boost his public profile by paying for bots.

Bots are software applications that perform automated tasks on the web, such as following people’s social media pages to make them look more popular.

However, there is a more likely reason for Mr Abbott’s sudden surge abroad – his blossoming friendship with Indian Prime Minister Narendra Modi.

Mr Modi has a combined Twitter and Facebook reach of 23 million, and has been more than complimentary towards Mr Abbott during his time at the Brisbane G20 summit earlier this month.

Last week, Mr Modi shared a selfie with his “friend” Mr Abbott at the MCG which went viral with 700,000 likes.

In a November 15 tweet, the Indian leader also described the Australian prime minister as “warm and full of life”. Commenting on the bot allegations, a spokeswoman from prime minister’s office said leaders in Australia for the G20 had attracted a large amount of traffic to Mr Abbott’s social media.

“It is no secret that the Prime Minister hosted a number of world leaders in recent times, including Indian Prime Minister Narendra Modi,” the spokeswoman said.

“These visits attracted large international audiences to the Prime Minister’s social media channels, thus generating a spike in organic engagement with the page.”

The jury is still out on how genuine Mr Abbott’s fan base is however, with an audit of his Twitter account revealing only 52 per cent of his followers are genuine.

He may be well on his way to world domination thanks to Mr Modi, but the Australian prime minister still has a long way to go compared to other world leaders, with only 774,000 social media followers.

Why is Tony Abbott a huge hit in India?