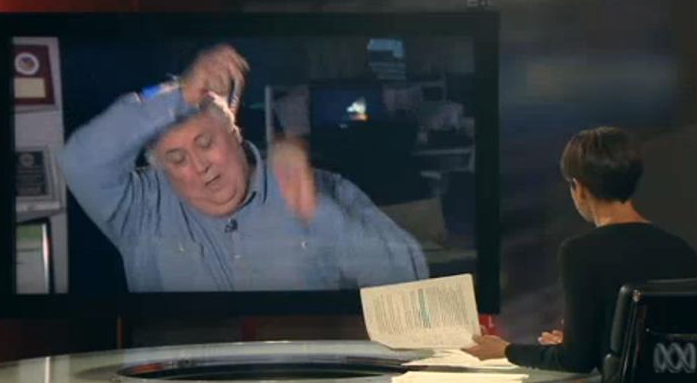 Clive Palmer has walked out of another television interview, this time with ABC Lateline host Emma Alberici.

The Palmer United Party leader got hot under the collar when Alberici began questioning him about his upcoming fraud trial.

The mining magnate has been accused of dishonesty and misappropriation of $12 million in funds by a Chinese government-owned investment group.

The trial is due to begin in the Brisbane Supreme Court next week.

When asked about the allegations against him, Mr Palmer said the document was “just not true”, claiming “that’s what the Chinese do”.

“They owe us about $700 million, our companies, because they haven’t paid for Australian resources they’re shipping back to China.”

When Alberici raised the issue of  “misappropriated” cheques made to the Palmer United Party, the party’s leader became agitated.

“Do you want me to answer madam, or do you want to just go on and talk?” he said.

When Alberici continued to press the issue, he pulled out his ear piece and stormed-off.

“Goodnight, goodbye, I don’t want to talk to you anymore. See you later.”

This is not the first time the PUP leader has prematurely ended an interview.