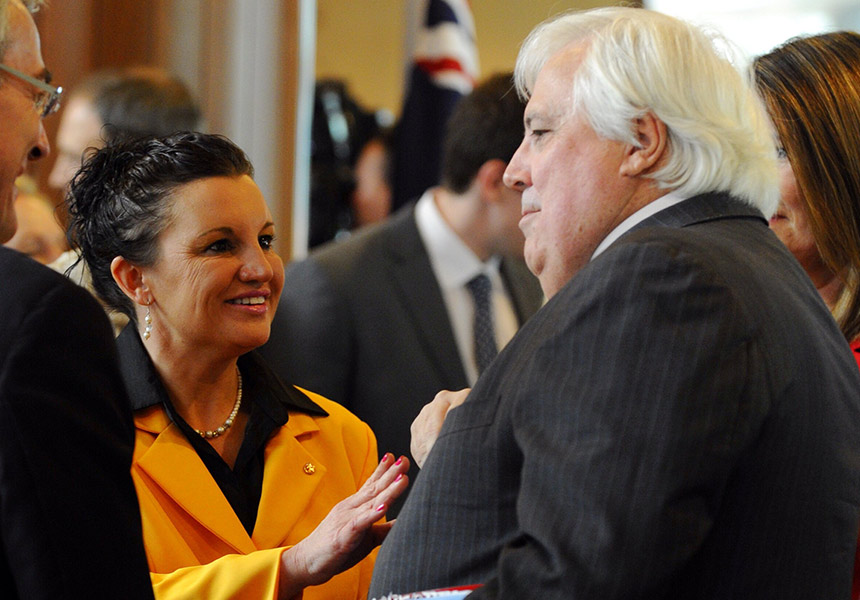 On July 15, the Abbott government appeared to pull off one of its most elaborate political coups of the year after winning Senate support for its controversial financial advice reforms.

That afternoon, the votes of three “newbie” senators from the Palmer United Party (PUP), along with Victorian senator Ricky Muir, caused the Senate to approve regulations that restored sales incentives for financial advisers.

The government regulations introduced to the Senate by Finance Minister Matthias Cormann also diluted the duty of financial advisers to always act in the best interests of clients.

The government won the vote because Cormann had been able to strike a last-minute deal with PUP leader Clive Palmer.

Soon after cutting the deal, Palmer told Lambie and the other PUP senators that the complex reforms would strengthen consumer protections in the financial advice industry.

Lambie and the other fledgling senators – who were still finding their feet in Canberra – saw no reason to deviate from the political path lain by their leader.

The encounter that got Lambie thinking

But Lambie’s outlook on the financial advice reforms may have begun to change only a few minutes after the critical Senate vote was taken.

After leaving the Senate chamber, Lambie went for a coffee at Aussies Café at Parliament House.

After taking a seat, she was spotted by Timbercorp investment victim Naomi Halpern, who made a beeline for the senator from Tasmania.

It was only a brief encounter, but long enough for Halpern to discern that the senator had just voted for something that she probably didn’t believe in.

Lambie expressed surprise at Halpern’s concerns about the government reforms, thinking that she and her colleagues had scored a victory for consumers.

It led Halpern to conclude that the complexity of the government regulations had masked their real meaning to new senators.

“After that conversation I formed a view that the Palmer United Party senators really believed they were doing the right thing by consumers in supporting the government’s regulations,” Ms Halpern told The New Daily.

“Since then, Jacqui and many other senators have had an opportunity to review the likely impact of the changes.”

It did not take long for consumer lobby groups to work out that the fight against commissions and conflicted remuneration in the financial advice profession was still hanging in the balance.

“I got a sense during our meeting that she understood this issue was about ordinary people and the problems they were having with financial advisers,” he told The New Daily.

“It was equally apparent at the time that she was going to take advice from the party.

“I thought enough of her responses to believe there was fertile ground for us to return to.”

The circumstances of the “newbie” senators favoured the government in July.

People who visited the offices of the fledgling politicians at the time observed that computers and phones were not in working order and, in many cases, the new politicians had no staff.

“It was chaotic for them,” said O’Neill.

However, the political circumstances changed almost instantly in the second week of August when the controversy over the Commonwealth Bank’s financial advisers dominated news bulletins across the country.

Lambie’s view of the reform package began to evolve after the chat with Halpern.

Meetings with peak consumer lobby groups such as CHOICE, National Seniors Australia and the Council of the Ageing throughout August and September eventually led Lambie and Muir to reverse their positions.

In August, Lambie was still clinging to the possibility that support for the government’s reforms equated to “doing the right thing by consumers”.

But as more advocates alerted her to the likely effects of the reforms, her doubts began to intensify.

“We’ve saved the FoFA reforms haven’t we?” she asked one dumbstruck lobbyist in August.

By September Lambie and Muir were worried they had each made a mistake.

Their opposition to the reforms hardened in October.

The first public indication that Lambie was out to kill the government’s financial advice changes came on November 1, when she told The Saturday Paper that she had “a bloody problem” with the reforms.

“I’ve let my party know I’m not happy. I think we’ve allowed the laws to be maybe watered down. I think we have got good intentions but I don’t think we’ve got it quite right,” she said.

Consumer advocates have scored a major victory through their lobbying campaign.

CHOICE’s head of campaigns Erin Turner acknowledged that there were many meetings with Lambie and other senators since July.

“They’ve given us a lot of time to talk about these issues,” she said.

The big loser – apart from the government – is Clive Palmer.

The revolt by Lambie and Muir on the financial advice reforms erodes the big Queenslander’s bargaining position with the government.

Now that the Palmer party has fractured, Clive’s political currency has taken a big hit.

The bottom line is that the Abbott government can no longer rely on him to deliver power in the Senate.

How a coffee with Jacqui opened doors to consumers