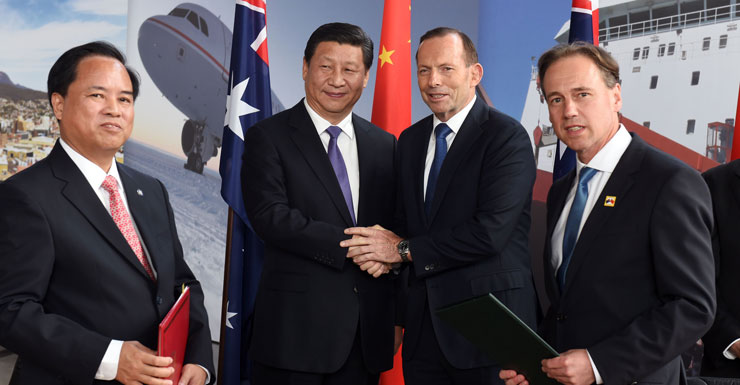 Australia should welcome China’s commitment to an Antarctic future that’s peaceful and free from mining, without worrying about the Asian superpower’s expansion plans on the frozen continent, the federal government says.

Chinese President Xi Jinping was joined by Prime Minister Tony Abbott in Hobart on Tuesday to sign an agreement for closer ties between the nations for the sake of science at the South Pole.

The deal, under which China recommits to the Antarctic Treaty and maintains a demilitarised Antarctic zone, was signed by Environment Minister Greg Hunt and senior Chinese official, Liu Cigui.

“For Australia to have peaceful southern waters, to have a peaceful Antarctic, to have an Antarctic free of mining, that’s out responsibility and that’s our gift to future generations,” Mr Hunt told reporters.

Recent news reports out of Beijing have detailed Chinese plans for the country’s own airstrip on its Antarctic territory and there’s global concern about the rate of China’s expansion on the ice.

But Mr Hunt says there’s no cause for concern, adding Mr Xi has the environment’s best interests at heart.

“He does have a history … of being a genuine and committed conservationist. You couldn’t have a better guarantee.”

The agreement also hopes to promote Hobart as a gateway to Antarctica, offering ships and aircraft a transit point and making the city a hub for polar research and education.

“There is no one with whom we are closer than China in terms of Antarctic co-operation,” Mr Hunt added.

The official business on Hobart’s waterfront was a small part of Mr Xi’s visit to Hobart, which lasted about six hours, accompanied by his wife Peng Liyuan.

The couple were greeted by adoring school children.

After some tense moments at Hobart Airport when members of the over-zealous Chinese media pack refused to follow instructions from local police, the presidential motorcade made its way courtesy of a green-light corridor to Hobart’s Government House.

The visit ended with a trip to the summit of Mt Wellington, with a commanding view across the city.

The Tasmanian government and business leaders say Mr Xi’s time in Hobart will bring valuable exposure for the island state.

China is already Tasmania’s largest international tourist market and takes some $600 million a year in exports.