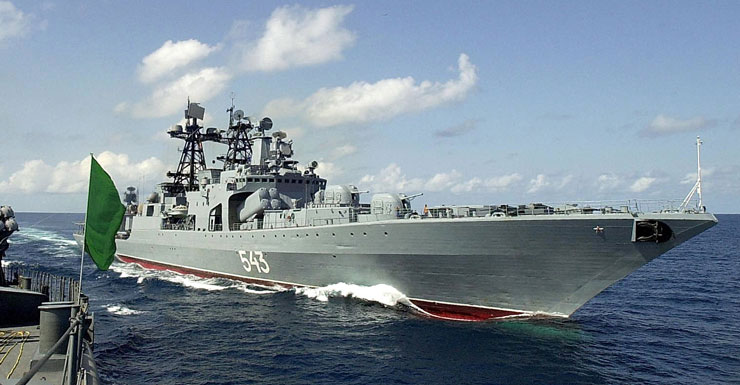 Defence Force chief Mark Binskin has downplayed the strength of a Russian naval fleet north of Australia ahead of the G20 leaders’ summit in Brisbane.

Asked why Russia was sending four ships to the international summit instead of the usual one or two, he indicated they weren’t all warships.

• Abbott, Putin face off in China
• Rather than a shirtfront, Abbott mugged by reality

Russia had publicised its intent to deploy a task force to the South Pacific a while ago, and an ocean-going tug and an oiler are part of that group.

“So it’s just one part of their operations. They’re in international waters. They’re allowed to do that. And we’ll continue to surveil them,” he said.

The news comes after a highly anticipated exchange between Prime Minister Tony Abbott and Russian President Vladimir Putin at this week’s APEC summit in Beijing ahead of the G20.

While “no harsh words” were exchanged during the 15-minute meeting, Russia rejected Mr Abbott’s demand the Kremlin apologise for the downing of the passenger jet MH17 over Ukraine.

The attack resulted in the deaths of 298 people, including 38 Australian citizens and residents, and is believed to have been carried out by separatists using Russia equipment.

Asked if the ships were a show of force, Air Chief Marshal Binskin said: “You’ll have to ask the Russians.”

It’s not the first time Russian naval vessels have been present while an international summit is on.

Russian warships were around for an APEC meeting in Singapore in 2009 as well as former Russian president Dimitri Medvedev’s visit to San Francisco in 2010.

Defence is directing further questions regarding the vessels to Russian authorities.