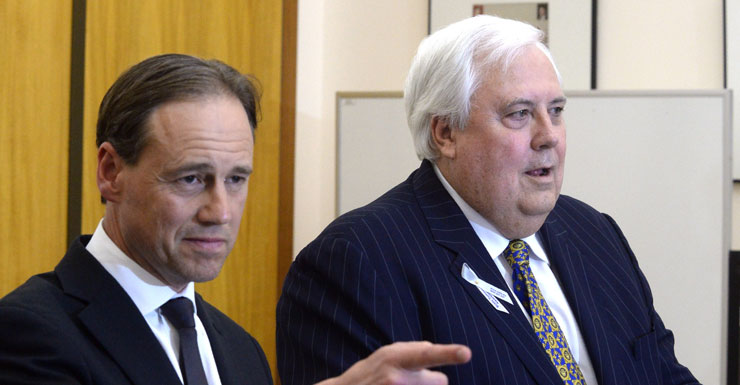 The government made several concessions to win the support of the Palmer United Party and other crossbench senators to get the plan up and running.

In return for PUP leader Clive Palmer’s backing, the Coalition broke a pre-election promise not to abolish the Climate Change Authority, and will fund an 18-month review into the effectiveness of emissions trading schemes around the world.

The authority will be asked to investigate and report to parliament on the PUP’s concept of putting an ETS on standby pending similar action by Australia’s major trading partners. Mr Shorten, whose party has lobbied against an Direct Action, said “Prime Minister Palmer” was “calling the shots”.

“Tony Abbott has once again sold his soul to Clive Palmer and Australia will pay the price,” he said.

“This is a dirty deal that will send our country backwards. Direct Action is a stupid and reckless policy that will achieve less but cost Australians more.

“It’s clear that it’s Prime Minister Palmer calling the shots in this government. This isn’t a policy to tackle climate change. It’s a policy to get Clive Palmer’s vote.”

Greens leader Christine Milne was also swift to slam the deal, labelling it a “sham”.

Palmer has helped Abbott kill off emissions trading, end the mining tax and is now passing a policy that will pay polluters to pollute — Christine Milne (@senatormilne) October 29, 2014

“Everyone will see it for what it is. It’s a terrible day … Australia is already humiliated globally by only having a five per cent emissions reduction target and now we’ve got a complete sham of a policy,” she said.

“I wonder what the G20 is going to make of what is essentially a grants scheme.”

“This is a tremendous outcome for the government – one of our signature policies is being achieved,” Mr Hunt said.

He said the government was still firmly opposed to an ETS but the inquiry was “as an important part of the negotiations and … a show of good faith”.

Mr Palmer, who previously described the government’s policy as a waste of money which would achieve nothing, said he now saw a “lot of positive initiatives” in the Direct Action policy.

He told reporters his party had “kept alive the emissions trading scheme” through an inquiry led by the authority.

The parliament will receive a report in November, followed by a more detailed update in June 2015 and a final report in June 2016 after United Nations climate talks in Paris.

“I think from our perspective, once our trading partners all have an ETS, it’s fundamental that Australia has one,” he said.

“Because if we don’t, we’ll be saddled with a tariff effectively for the export of our products to those markets.

“So both from an environmental and a commercial point of view we think this must happen.”

These measures to benefit all Australians & unify the nation .. important step forward in 2015 as we commemorate the Anzac Centenary #auspol — Clive Palmer (@CliveFPalmer) October 29, 2014

He said his party had achieved what the Greens were unable to – preserving the Climate Change Authority, retaining the Renewable Energy Target and making progress towards delivering an ETS.

“We would expect Green votes to flow to Palmer United Party on the back of this achievement which will deliver tangible results for the environment, not just talk,” Mr Palmer said.

Climate groups are sceptical about the effectiveness of direct action, and its $2.55 billion emissions reduction fund centrepiece.

Mr Fraser said he hoped the agreement was the start of an “emerging broader political consensus” on climate change and the need to take effective action.

Senator Xenophon has also been granted four of the amendments he had been calling for.

Under the Direct Action plan, polluters would be paid to reduce emissions, in a scheme which has been estimated to cost more than $2.5 billion over four years. The target is a five per cent reduction in emissions by 2020.