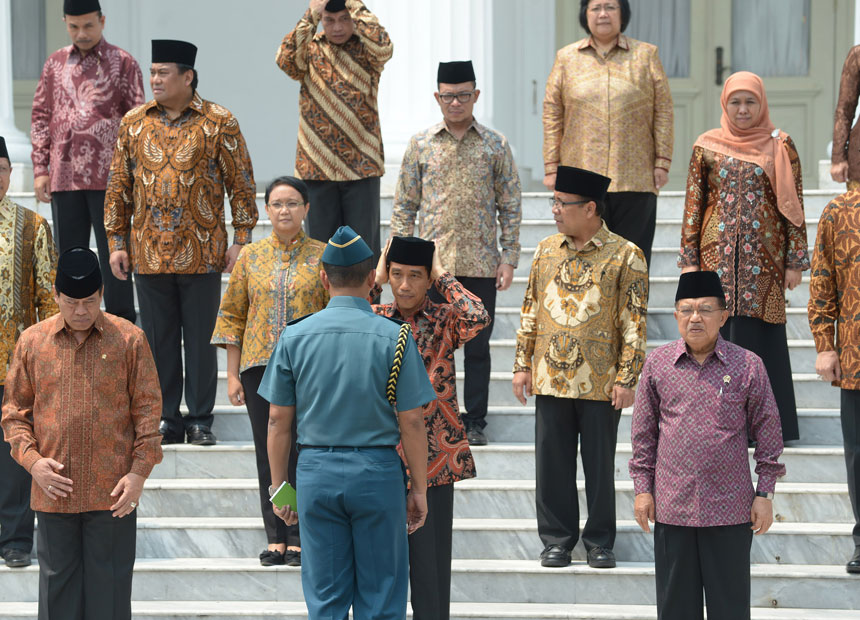 Indonesia’s new president Joko Widodo has appointed eight women to his cabinet, vastly outdoing the Australian government when it comes to female representation.

The humble furniture maker-turned president, more accustomed to carving wooden cabinets than those of the political kind, will embark on his reformist agenda with plenty of female input, including from former Indonesian ambassador to the Netherlands Retno Marsudi as Foreign Minister.

At a tick under 25 per cent female, the Indonesian cabinet is still well away from gender parity, but the move is nevertheless a huge step forward for the country, according to regional political expert Professor Damien Kingsbury of Deakin University.

“It is quite unusual, the highest representation of women in Indonesian cabinet ever,” he told The New Daily.

Kingsbury said that although Widodo had not campaigned specifically on the issue of bringing more female input into cabinet, he had outlined a broad reform agenda and the influx of women fitted in well with that.

He noted that the appointment of Marsudi as foreign minister could prove awkward for the Abbott government due to more reasons than just her gender.

“She has previously had a diplomatic posting in Australia and knows how things work here,” he said.

“She can be expected to follow [Widodo’s] policy views very closely, and his policy views on Australia very much relate to asylum seekers and the turn back the boats policy, which he’s very much opposed to, so I imagine she will very closely follow the line laid down by the president on the issue.”

When not banging heads on asylum seekers, Bishop – one of the most popular members of Abbott’s front bench – may wish to consult Marsudi regarding the benefits of having more than one woman in cabinet.

In an interview with News Limited last weekend, the Australian foreign minister pledged to lobby for more female representation in the Coalition’s inner circle.

“Absolutely, they are cabinet material,” she said.

“I have seen them at close hand and worked with them, and I will certainly make their case to the prime minister.”

Bishop said that while she would be backing in more women if any reshuffles were to occur, changes would be difficult as Tony Abbott, who appointed himself as minister for women, had made a pre-election pledge to leave the team as it is.

“But I will make their case and it will be merits-based; they deserve to be there because of their ability,” she said.

It is not the first time Indonesia has outshone Australia when it comes to females in politics, given the country’s first female president Megawati Sukarnoputri took power in 2001, nearly a decade ahead of Julia Gillard.

Kingsbury said that while Megawati’s trailblazing effort may have inspired some of the current crop of female Indonesian politicians, the fact she was not regarded as a particularly successful president meant her impact was likely minimal.

Although he described Indonesia as mostly a traditional society that relegates women to subservient roles, he noted that the criticism of Megawati, who only served one term, mostly related to perception of her as an insider of the political elite, not her gender per se – Megawati is the daughter of Indonesia’s first president Sukarno.

This new generation of women coming through in Indonesian politics for the most part aren’t carrying the same kind of political cronyism baggage, so it will be interesting to see how the Indonesian media and public embrace a more gender-balanced leadership team.

If Australia’s closest neighbour welcomes their new-look ministers, the pressure will only increase on the Abbott government to follow suit.