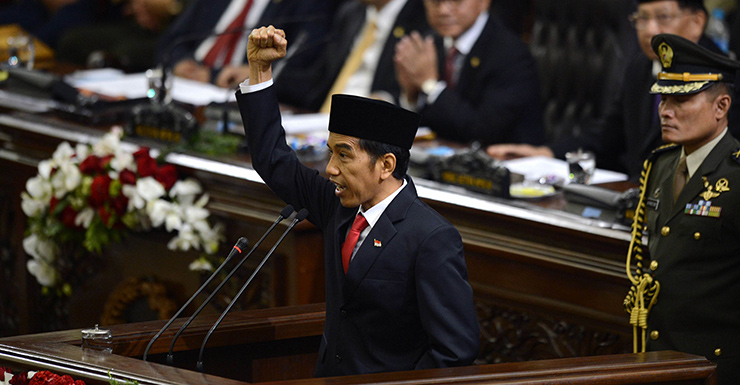 Tony Abbott was an uninvited guest at the inauguration of Indonesia’s new president Joko Widodo, but he was not a gatecrasher. He was only following the convention-busting precedent set by his old mentor John Howard, and followed by Labor’s Kevin Rudd.

Traditionally Jakarta issues no invitation to world leaders for the swearing in of a new president, but 10 years ago Mr Howard judged that testing Javanese hospitality was worth it if he could make the point that Australia will stop at nothing to be Jakarta’s friend.

But subsequent events also show Canberra will also stop at nothing to test that friendship.

In his first interview with an Australian media outlet, President Jokowi, as he’s also known, made it crystal clear he would not brook Australia breaching Indonesia’s sovereign maritime borders in asylum seeker boat tow backs.

The last time we did that is still shrouded in official secrecy. We got clues about it in January when the government fessed up to five “inadvertent” incursions during maritime operations. It was better to cast aspersions on the competence of our navy than to admit what it was really up to. That embarrassment occurred at the depth of the freeze over revelations Australian spies targeted President SBY and his wife.

It took six months for Jakarta to return its Ambassador to Canberra. He was withdrawn after the president “felt betrayed by his best friend Tony Abbott” when the Prime Minister refused to apologise for the espionage. While the breeches happened when Labor was in power, more deft handling was required by the current government than was subsequently on display.

Foreign Minister Julie Bishop was left to do the mopping up, as she did with Russia’s Vladimir Putin at the weekend, not shirtfronting him but showing the diplomatic maturity of a veteran. Her negotiations with Indonesia’s Marty Natalegawa convinced the president that the Abbott government was showing some contrition. Guarantees were written into the Framework for Security Co-operation signed in August. Two articles spell out respect for the sovereignty and territorial integrity of the partners and for maritime security consistent with international law.

Immigration Minister Scott Morrison, whose unyielding determination to stop the boats saw him as the “main culprit” ignoring the diplomatic niceties and legal restraints, now believes it’s all behind us.

He hails the new president as someone Australia can work with.

“We are looking to do that across a whole range of fronts and one of the good things is that we are no longer dealing with that fatal curse of people smuggling in the same way that was occurring under the previous government.”

Labor warned against tow backs precisely because they would offend and provoke a hostile reaction. But this government privately dismisses that as hogwash. It believes our giant neighbour actually welcomes its success in stemming the refugee flow. Any repeat offence would sorely test that proposition.

The Prime Minister sees Jokowi as a charismatic leader and a breath of fresh air. He is clearly banking on the President staring down the majority in the parliament that so far answers to his bitter rival for the top job, Prabowo Subianto. Subianto is a harder line nationalist and his allies would not be as accommodating to Canberra as we’ve grown accustomed in recent years. Crucial cabinet negations could in fact see the President stay away from the Brisbane G20 summit.

Few could argue with Mr Abbott’s sentiments on the eve of the inauguration.

“Indonesia is a hugely important neighbour,” he said, offering a reminder of the might of Australia’s immediate northern neighbour.

“It has the world’s largest Muslim population, it is the world’s third largest democracy and along with India is the emerging democratic superpower of Asia.”