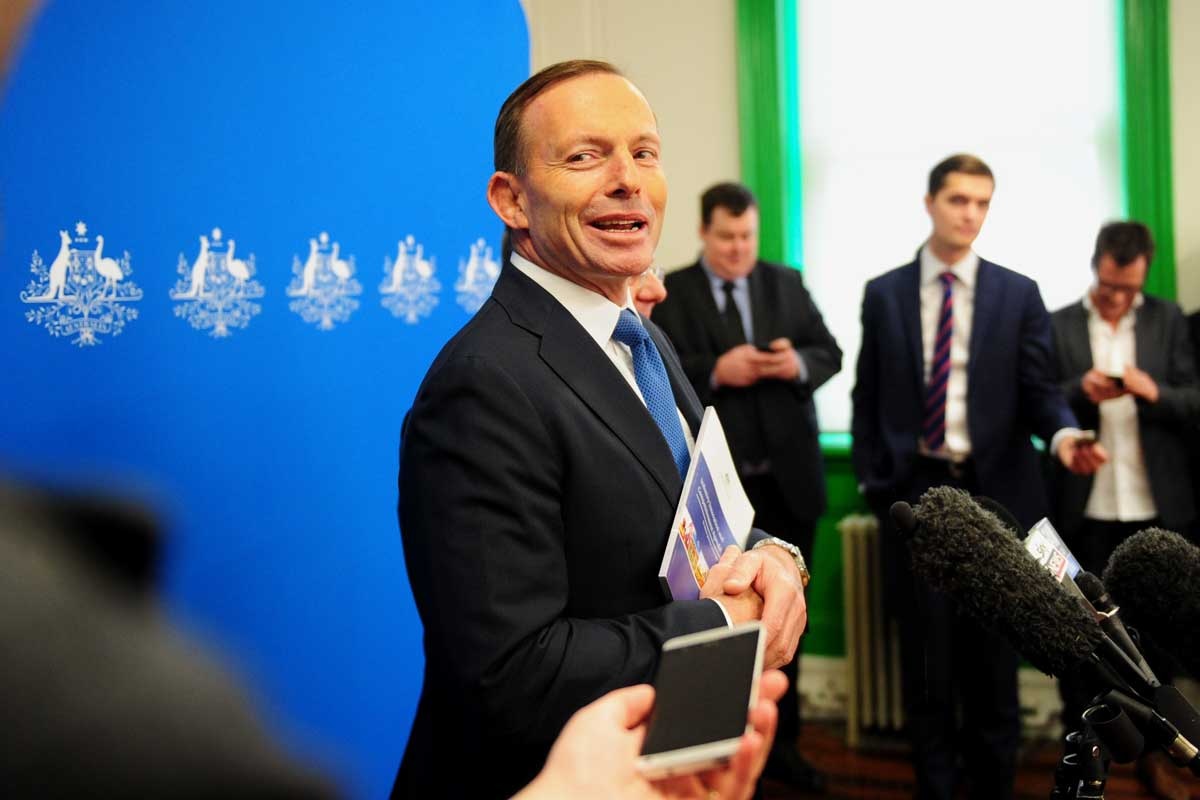 Tony Abbott’s threat to “shirtfront” Russia’s President Putin prompted many people to ask: what does that mean?

Another good question would be: why can’t our politicians talk like grownups?

Mr Abbott’s assurance on Monday that he would shirtfront Mr Putin over the Malaysia Airlines MH17 disaster was the latest cringeworthy utterance from our political leaders.

A quick dictionary check reveals shirtfront to be a dated AFL term for a shoulder charge.

Along with his infamous “suppository of wisdom” it’s talk that jags at the ear rather than carries its intended message.

“I don’t want to see Australian service men and service women caught up as the meat in an Abbott-Morrison secrecy sandwich on our boats.”

In March, he borrowed “cheese-eating surrender monkeys” from The Simpsons and various US politicians to insult the government.

Wince-making talk isn’t new: Kevin Rudd horrified the nation with “fair shake of the sauce bottle mate” in 2009; Julia Gillard promised to put “the real Julia” on display in 2010.

Abbott, Rudd and other leaders are smart people but Australia’s matey, larrikin culture values “the university of the street”, Dr Tredinnick says.

So well-educated people worry about sounding like themselves and instead try to “sound like one of us”.

“I think the thing that offends us now so much is that what comes out of their mouths seems so manifestly designed – it’s sort of overdesigned looseness and it’s unnatural and off-key – and sort of just daggy,” he said.

“If it’s fake it has a way of sounding fake.

“That’s the thing that’s happening more and it is in part because of the way that the media is structured around the newsbite.”

Don Watson, speechwriter for former PM Paul Keating and author of the book Death Sentence: The Decay of Public Language, says politicians are unconvincing or “sound like jerks” when they affect fake plain speaking.

We have politicians who represent and play back to us the least of who we are, the worst of how we think and speak.

“They think it’s plain vernacular and it’s not. It’s just as manufactured as any kind of high-falutin’, Oxfordian speech and coming from the wrong mouth it sounds really stupid,” Mr Watson said.

“It’s cooked up by the geniuses who politicians surround themselves with these days, who are as cut off from the vernacular as those same Oxfordians.”

Mr Watson points out that Robert Menzies had a “manufactured Oxford accent” but remains Australia’s most successful prime minister in terms of longevity.

Advisers did try to get Mr Keating to speak in matey, colloquial terms, said Mr Watson, but “he resisted that sort of stuff”.

Bill Shorten’s secrecy sandwich grab sounded totally confected, according to Mr Watson, and doesn’t work as a message even if it made the TV news.

“Does anyone go away thinking `Oh there’s an Abbott-Morrison secrecy sandwich which is a threat to my life’? I don’t think so,” he said.

Dr Tredinnick said Australians can blame sound-bite culture and the 24-hour news cycle for some of the current situation but have themselves to blame as well.

“We have politicians – right now more than ever though not all of them – who represent and play back to us the least of who we are, the worst of how we think and speak,” he said.

Until Australians demand a “more gracious and grownup” writing and speaking in our daily lives, we will get the politicians we deserve, he said.

But politicians’ fake-speak won’t worm its way into popular language in the way that management-speak such as “operationalise” and “facilitation” have.

“They baffle and confuse and make you think mostly about how little the speaker is really sure about what he is trying to say,” Dr Tredinnick said.

“So I think we are resistant to that kind of bullshit.”

For now, as the circus rolls on, the likely result will only be deepening scepticism about the quality of our leaders.

Mr Watson has the same view of today’s political discussion.

“I’ve been looking away for a long while,” the wordsmith said.

Shirtfronts, sauce bottles: our pollies need to get real