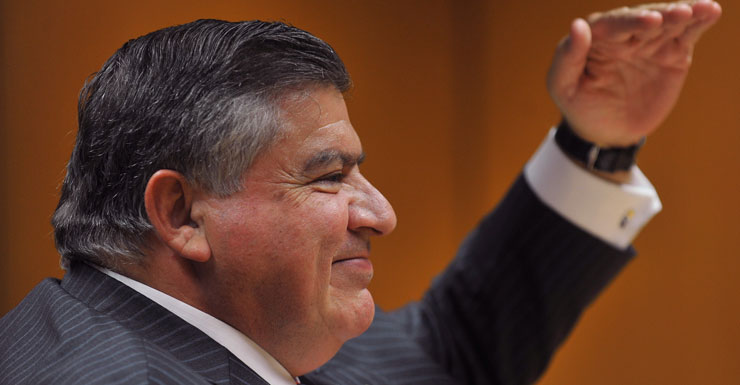 Aussie Home Loans boss John Symond has hit out at a proposal to dampen investment borrowing in the booming Sydney and Melbourne property markets, saying it will not work.

The head of the Reserve Bank’s financial stability department, Luci Ellis, told a Senate hearing on Wednesday that financial regulators were considering measures to cool residential investment activity by making it more expensive to borrow for an investment property in the nation’s two biggest property markets.

However, Mr Symond dismissed the proposal, claiming it was not likely to be effective.

“There are some investors who believe that population growth leads to price appreciation for housing and, history shows they are right to make this assumption.”

The central bank is worried that soaring property prices in these cities represents a major risk to the Australian economy.

Dr Ellis told the committee that the nature of the problem is “primarily concentrated in the inner parts of Sydney and Melbourne in terms of investor demand”.

While Dr Ellis did not outline the details of any proposals, she observed that the Australian Prudential Regulation Authority had scope to introduce measures that took into account different market conditions across Australian states and cities.

This raises the prospect that regulators might force banks to discriminate on lending to investors according to where they want to invest.

With such a measure, regulators would force lenders to put aside more regulatory capital to cover potential losses on investor loans in the biggest cities where speculative activity was now peaking.

In other words, they might make it more expensive for the banks to lend to investors in Melbourne and Sydney.

Such a measure might act as an incentive for lenders to reweight their investment lending to less overheated property markets in Queensland and South Australia. But Mr Symond told The New Daily he thought the plan was flawed.

“I don’t think investors will want to be shunted into certain areas of Australia – Sydney and Melbourne have always been popular markets for investors because that is where population growth has consistently occurred,” he said.

Queensland Senator Jan McLucas quizzed Dr Ellis and Assistant Governor Malcolm Edey on what steps regulators would take to ensure the measures did not have unintended consequences in stable property markets elsewhere in Australia.

Senator McLucas expressed concern that moves to stymie property speculation in Melbourne and Sydney might also cause banks to reduce investment lending in struggling parts of Queensland.

She sought assurances from Dr Edey that the new regulatory measures would be crafted to avoid such effects.

“All I can say is that we need to be mindful of that risk in designing the tools,” he said.

Dr Edey said it was highly unlikely that financial regulators would introduce new restrictions on home lending to owner occupiers, although he refused to rule them out.

Alexandra Kelly, a spokesperson for the NSW Financial Rights Legal Centre, said her organisation was relieved that the RBA had almost ruled out introducing new loan limits for first home borrowers.