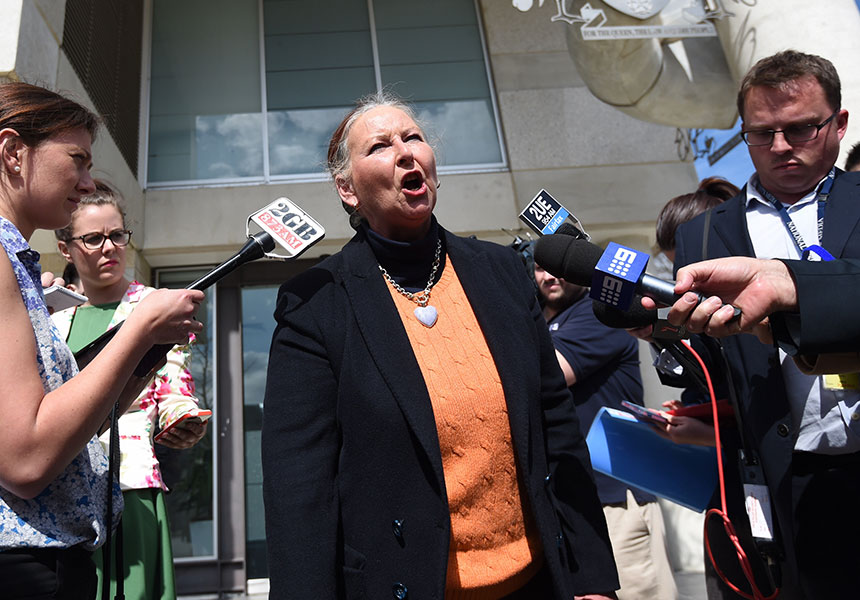 The ex-wife of Peter Slipper has blamed a “witch hunt” and Tony Abbott’s lust for power for the punishment meted out to the former Speaker of federal parliament by an ACT court.

A clearly incensed Lyn Slipper was not content that the father of her two children avoided jail time on Wednesday for dishonestly using taxpayer-funded taxi vouchers.

While Slipper remained stony-faced and tight-lipped throughout his sentencing and during his exit from the ACT Magistrates Court, she was not so sanguine.

There was no justice when the hardest-working member of the House of Representatives had been persecuted “almost to the grave because he got in the way of Tony Abbott’s lust for The Lodge,” his first wife told reporters during a 20-minute tirade outside the court.

“This has been a personal political vendetta. A witch hunt.”

Slipper, 64, was facing a five-year maximum prison term after being convicted in July of three counts of dishonesty.

Instead, she placed him on a two-year good behaviour bond, ordered that he serve 300 hours of community service and repay $954 to the Commonwealth.

Ms Slipper, who was ushered from the courtroom after the sentence was handed down, claimed the prosecution of her ex-husband had cost taxpayers $3 million to pursue less than $1000.

“People like me go to work to wipe f***ing arses to pay the tax for a court like this,” the registered nurse said.

Ms Slipper insisted her “innocent” ex-husband had made an honest mistake and that he could not make the criminal distinction between eating or drinking at any bar or restaurant in Canberra and a winery.

Magistrate Walker labelled Slipper’s actions in using government-provided taxi vouchers to visit vineyards outside Canberra in 2010 as “greed not need”.

In deciding a prison term was not appropriate she took into account the public humiliation the former Liberal MP for the Queensland federal seat of Fisher had suffered since his fall from grace.

However, she rejected the defence argument that no conviction be recorded, noting Slipper had shown no remorse for his actions.

While the financial impact was small, it undermined public confidence in government.

“It was the public as a whole who was the victim in relation to the fraud,” Ms Walker said.

Slipper is appealing the conviction in the ACT Supreme Court.