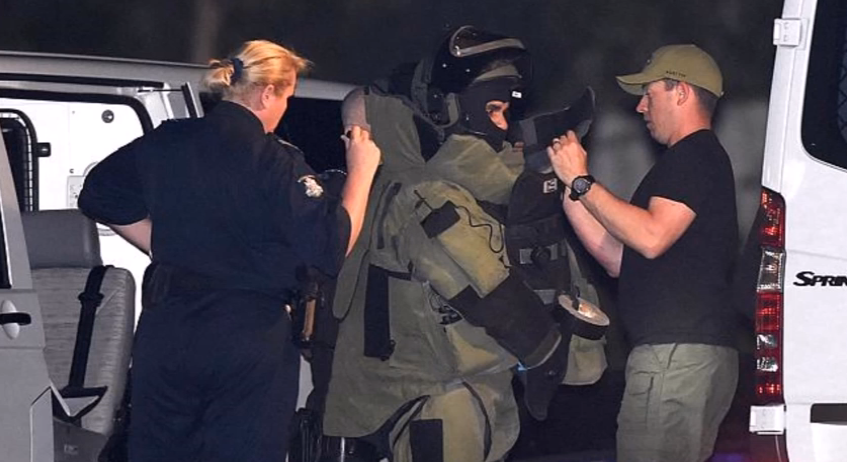 Police say they had “no choice” but to fatally shoot a terrorism suspect after he stabbed two officers in Melbourne.

The AFP officer suffered multiple stab wounds, and the Victorian officer received a wound to his forearm.

Both were taken to hospital, where they remain in a stable condition.

It is alleged the deceased man, who attended the police station voluntarily, made threats against Prime Minister Tony Abbott.

The man reportedly shook hands with police before attacking with a knife.

Police said there was information suggesting the man had previously displayed an ISIS flag.

The ABC has reported that the teenager’s passport was recently cancelled.

Federal Justice Minister Michael Keenan said the attack was “unprovoked” and he believed police shot the man “in self defence”.

“While this is a horrible incident, we do need to remain calm and go about our daily lives,” he said.

“I would encourage people to remain calm and let the authorities get on with their jobs.”

During a midnight press conference, Victoria Police Assistant Commissioner Luke Cornelius said the suspect had been invited to the police station to talk to the members of the Joint Counter Terrorism Taskforce.

“It’s also clear to us that our members has no inkling that this individual posed a threat to them,” he told the media last night.

“As far as we were concerned, it was going to be an amicable discussion about that individual’s behaviour. It’s also clear to us that the individual, without any warning to any of our members, produced a knife and proceeded to assail them with a knife, causing serious injury to both those members.

“It’s absolutely clear to us that our members really had no choice other than to act in the way in which they did.

“I am sure that I will face some criticism for making those points, but I want to make clear here, it is important that the community understands that this is not an exercise in police seeking to single out particular individuals in the community.

“When we see individuals in the community behaving in a way which causes a concern for public safety, we have to reach out to those individuals and do what we can to understand what it is that they might be planning to do.

Assistant Commissioner Cornelius said the man was thought to be acting alone.

“In terms of providing some reassurance to the community, it’s our belief that this stage that this was an isolated incident, although it has ended in tragic circumstances – tragic for the individual concerned and that individual’s family.

“Of course, I’m very concerned about the safety of my members and although they are seriously injured, it is a matter of some relief to me that they will live to fight another day.”

Police ‘had no choice’ in terror suspect shooting