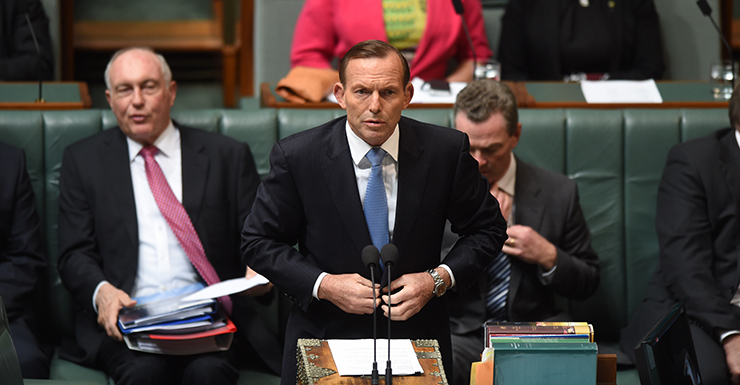 There are two major summit meetings at the United Nations in New York this week. Tony Abbott has put one up in neon lights so bright they rival the glare of Times Square. The other, which mobilised the biggest street protest in the Big Apple’s history, hasn’t rated a mention.

If you believe the Prime Minister the threat of a terrorist attack motivated by extremists murderously rampaging through Iraq and Syria is a greater issue for the world than climate change. Never mind the consensus of scientists that human activity is making the entire planet more vulnerable to catastrophic weather and the window of opportunity to do something about it is rapidly closing.

United Nations Secretary General, Ban Ki Moon, needs little convincing. He led the huge demonstration through Manhattan followed by placards warning “There is no planet B.” He’s scheduled a summit the day before the Iraq discussion. Sixty five world leaders are attending, 60 others including our own PM are sending representatives. Tony Abbott will arrive the next day.

The Australian government is proud of its leadership role in marshalling support for the Iraq intervention, but it has abandoned any pretence that it takes global warming anywhere near as seriously. Silence from Mr Abbott on the issue speaks volumes. All his efforts are going into the mission to defeat the “death cult” he calls the Islamic State.

Not surprisingly, the Greens are the most outspoken about this. Christine Milne says, “unfortunately the fossil fuel industries have this government in their pocket.” The fact is national security is traditionally a strong suit for the Coalition which goes a long way to explain what’s happening.

Former intelligence analyst now independent MP Andrew Wilkie says the chances of Australians being killed in a terrorist attack are negligible. Australian Bureau of Statistics data tends to support him. In the last 10 years extreme weather events in Australia have claimed 85 lives, terror attacks none. While he believes the onslaught in Iraq should be dealt with, he worries our approach is counter productive.

Half a billion dollars a year will now be spent on our military mission which, according to Wilkie and the Greens, will only inflame extremists’ resentment. Wilkie points out that in the May Budget our foreign development aid to Iraq was reduced to “zero.”

While the Opposition is still in lockstep with the government, Bill Shorten has begun to put limits on support, ruling out combat troops or going into Syria. And he’s demanding a pull out when Iraq is in a position “to take full responsibility for its own security”.

Some in Labor are gobsmacked at the Abbott government’s willingness to discuss operational matters, threats to the prime minister and to parliament house. The rule used to be the most effective way ensure security was not to talk about it.

Old hands in the Press Gallery are sceptical about the lockdown of the ministerial wing, especially access for accredited journalists. It didn’t happen in the first two Gulf Wars, after 9/11 or Bali.

In its last term Labor spent $27 million dollars on security changes to the building. Former Attorney General, Mark Dreyfus told Radio National: “We didn’t talk about that while we were in government. I didn’t see it as necessary to do so.”

Tony Abbott takes his war rhetoric on the road