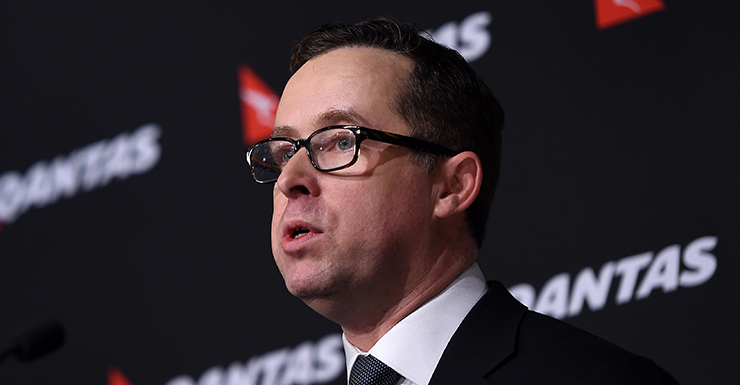 Alan Joyce will receive no pay for the remainder of this financial year. Other Qantas staff have been asked to take leave.

When it comes to the workers, there is no more unpopular boss in Australia than Qantas CEO Alan Joyce.

Ever since he engineered the Trojan Horse industrial strategy of launching low-cost Jetstar in 2004, he’s been despised by the Qantas pilots.

And when he summarily grounded the airline in 2011, there was barely a Labor politician or union official in the country who wasn’t calling for his head.

Even independent players like Senator Nick Xenophon have long campaigned for the pugnacious Irishman to be fired.

Any other CEO who spent six years in the job and then declared a $2.8 billion loss would be out the door within weeks. But Qantas shareholders continue to support Joyce.

Big loss by any measure

But if anything this staggering loss strengthened Joyce’s position and that of his chief backer, tough guy Qantas chairman Leigh Clifford.

For starters, Qantas shares jumped 7 per cent yesterday after Joyce declared that it was making operating profits right now.

Sure, another 2500 jobs will be lost by the end of 2017, completing a painful cost-cutting campaign which will eventually leave 5000 workers out of a job. But on purely financial terms, the cost base will by then be within 5 per cent of chief competitor Virgin Australia.

The $2.5 billion non-cash write-down of Qantas International was if anything a belated acceptance of reality.

The best news for Qantas shareholders – who haven’t received a dividend since the 6 cent payment in April 2009 – is that the debilitating domestic and international capacity war appears to be over.

Consumers were the biggest beneficiary as Qantas Domestic saw its loads fall from 76 per cent to 73.3 per cent last year as operating profit tumbled from $365 million to just $30 million.

The forecast 2014-15 spend on the Qantas fleet was cut by another $100 million to $700 million on Thursday and Joyce has been busily retiring older aircraft early, something which caused a one-off charge of $394 million in the 2013-14 financial year.

Apart the ongoing success of the frequent flyer business – earnings were up 10 per cent to a record $286 million last year – the actual airline parts of the Qantas business bled badly last year.

Even the traditional Joyce strength in Jetstar collapsed from a $138 million operating profit to a $116 million loss, which does make his various Jetstar joint ventures in Asia look like an over-ambitious mistake.

The much-vaunted Emirates deal has clearly not turned around Qantas International which saw operating losses more than double to $497 million in 2013-14. This too was a controversial Joyce-Clifford play, just like the grounding and the Jetstar Asia joint ventures.

The best that can be said of the Qantas story is that Alan Joyce hasn’t wasted a crisis. Instead, he pushed through significant difficult reforms such as rationalising its Australian heavy engineering operations in Brisbane.

At 48, Joyce is still a relatively young CEO, but after 6 years in charge, he’s out-lasted the typical leader of an ASX 100 company who doesn’t get past 4 years.

After Leigh Clifford replaced Margaret Jackson as chairman in 2007, many were expecting that Qantas veteran John Borghetti would succeed Geoff Dixon.

Considering the damage that John Borghetti has caused Qantas since defecting to Virgin, taking it upmarket into the business category, securing three new foreign airline funders (Etihad, Singapore and Air New Zealand) and triggering a capacity war in Australia, in hindsight it may well have been better if Clifford’s board had chosen Borghetti.

But Joyce has arguably had the toughest CEO job in Australia, complete with regular public calls for his head. Having held his nerve, Qantas is no longer screaming for a government bailout and its future looks relatively secure.

At the end of the day, Joyce has been a pragmatic leader. He’s faced a perfect storm of challenges – particularly the foreign governments throwing capacity at the Australian market – and come through in reasonable shape.

He’s not the best man to manage the long-term peace at Qantas given the feathers that he’s ruffled, but he deserves to see out his 50th birthday in the CEO hotseat.

Stephen Mayne is Policy and Engagement Coordinator for the Australian Shareholders’ Association, a City of Melbourne councillor and was the founder of Crikey.com.