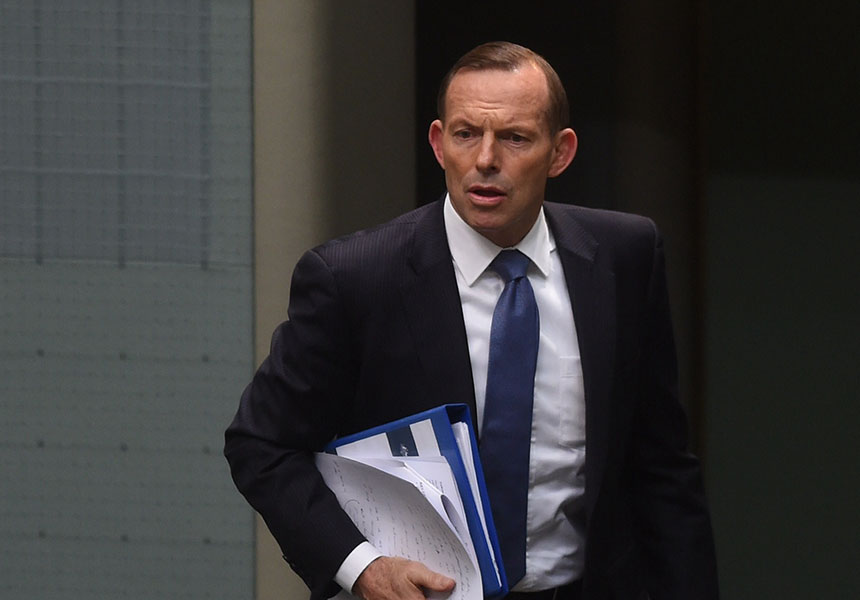 As Tony Abbott weighs up a bigger military effort in Iraq, it’s worth reflecting on political history.

John Howard once said that sending Aussie troops to Iraq in 2003 was the most difficult decision of his government.

The decision was not without its political risk, as people took to the streets to protest the invasion and Howard was heckled from parliament’s public gallery.

It was widely believed the government, based on Bush administration briefings, misled the public over the reasons for the Iraq invasion.

But despite all the turmoil, Howard survived and in fact thrived.

The then Liberal leader had several things going for him – a strong economy which voters were happy to sheet home to his government, and a weak and ill-disciplined Labor opposition led by Simon Crean.

As Abbott weighs up further Australian involvement in Iraq, to counter the new threat known as Islamic State, it is a different political ball game.

The prime minister even has his own two-word slogan – Team Australia – to drive his bid to tackle extremism and especially the factors behind disgruntled young Muslim men joining or advocating on behalf of Islamic State.

Less than a year into its term, the Abbott government trails Labor in two-party terms and Bill Shorten holds a narrow lead as preferred prime minister.

The economy and federal budget are seen as liabilities for the coalition.

The budget’s architect, Treasurer Joe Hockey, is blamed for much of the government’s woes and was the focus of Labor’s attack in parliament this week.

A recent Essential poll rated him the worst treasurer when compared with Peter Costello, Paul Keating and Wayne Swan.

Just when the government thinks it is on a winner by putting national security to the fore, 60 per cent of voters disapprove of a troop deployment to Iraq.

And the issue does not appear to be a priority with voters.

A True Issues survey by researcher John Scales put “defence and security” in eighth place as a priority issue, well behind health care, the economy, education, infrastructure, quality of government, community issues and the environment.

However, there are signs a tough approach to tackling home-grown terrorism may be resonating.

A Newspoll at the weekend showed 77 per cent support for new laws requiring people travelling to terrorism hot spots to justify why they went there.

The prime minister even has his own two-word slogan – Team Australia – to drive his bid to tackle extremism and especially the factors behind disgruntled young Muslim men joining or advocating on behalf of Islamic State.

Labor has been staunchly bipartisan in its approach to the issue, lending support to Abbott’s efforts while at the same time trying to keep the political focus on unpopular budget measures.

But cracks have started to appear, with West Australian senator Sue Lines voicing the concerns of some of her Labor colleagues this week.

She described the terrorism issue as a “shield” to deflect attention from the budget mess.

Immigration Minister Scott Morrison bluntly described her as a “muppet” who should be hauled into line by Shorten.

Labor frontbenchers declined to back Lines, but a few backbenchers were prepared to tweet support.

Shorten moved to clean up the mess by declaring Labor recognised national security was a matter which “goes above day to day politics”.

Such ill-discipline, even though venting the frustrations of many in the ALP and the community, will only play into the government’s hands.

But fortunately for Labor, ill-discipline is also haunting the government.

Abbott this week found himself defending a trip to Melbourne in which he attended a Liberal fundraising dinner and added a media event the morning after to justify taxpayers footing the travel bill.

While such travel claims are not rare, the fact it was leaked after a coalition party room meeting showed a breakdown in relations between some government members and the leader.

One senior Liberal and a regular thorn in Abbott’s side, Queensland senator Ian Macdonald, felt it necessary to put out a statement saying members did not comment on party room discussions.

But, pointedly, he said the no-comment rule allowed members and senators to “speak frankly in what are often robust and beneficial exchanges with ministers and the leadership group”.

Heading into another week of federal parliament, national security will continue to joust with the budget for political attention with many potential risks and rewards for Labor and the coalition.