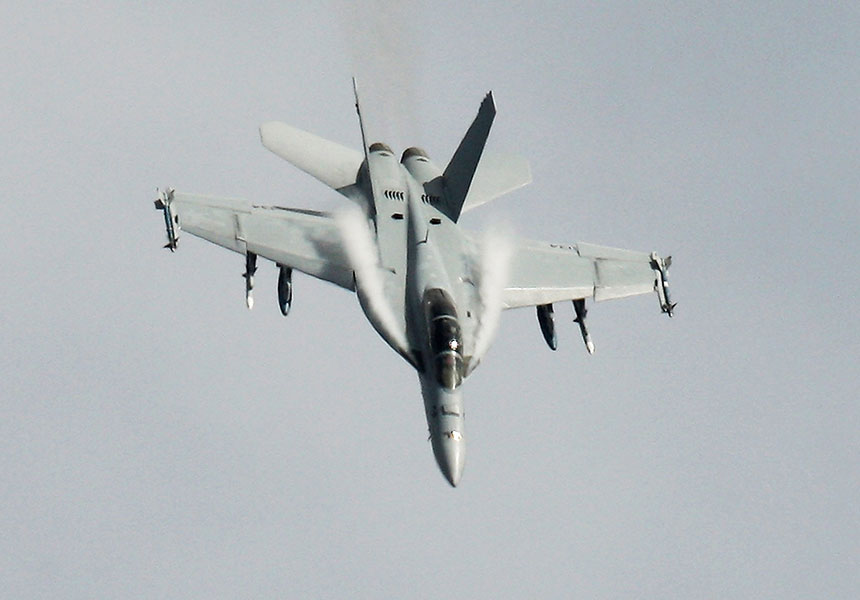 Defence Minister David Johnston says Australia has not “yet” been approached to commit Australian forces to join either expanded US air strikes in Iraq or potential military action in Syria.

“We do have a lot of capability at our fingertips – we’ve got Super Hornets, they’re incredibly capable.”

The New York Times has reported that the White House has begun a “diplomatic campaign” to enlist allies – including Australia – to increase support for Syria’s moderate opposition and provide support for possible American military operations there.

The NYT says White House officials expected Australia and Britain would be willing to join an air campaign.

Prime Minister Tony Abbott is understood to be considering committing the RAAF’s 24 Super Hornets to join US airstrikes against the Islamic State (IS), also known as ISIL.

A statement from Senator Johnston’s office had earlier said that “so far” a decision had not been made by the Australian Government.

And speaking on tonight’s Lateline program, Senator Johnston said while there is a “long way to go” before any fighter planes could be deployed, Australian forces are in a “high state of readiness”.

“We haven’t been approached yet other than with respect to humanitarian relief,” he said.

“I’m not going to talk about what we might or might not do operationally – currently our focus is specifically from a humanitarian perspective.

“We do have a lot of capability at our fingertips – we’ve got Super Hornets, they’re incredibly capable, they’re exactly what flies off US aircraft carriers.

“That’s an obvious first port of call were we to consider it necessary to participate with our friends and ally.”

The Minister indicated any decision about whether to escalate the military action may depend on the ability of Iraqi prime minister-designate Dr Haider al-Abadi to form a new government – his deadline is September 10.

Senator Johnston said there has to be “appropriate permission” from an Iraqi government but emphasised that the Australian Government had “grave concerns” about the threat of IS.

“If this situation continues, I think it’s incumbent upon nations that have a strong, clear and understandable reputation and sense of right and wrong to do the right thing here and assist a stable Iraqi government – if we can get one – to defend itself and to retake and assert some reasonable level of legitimate control over these villages,” he told Lateline.

A statement from the Prime Minister’s office released earlier said “the Government has made it clear that ISIL represents a serious threat; not only in Iraq and Syria and the wider Middle East, but also to Australia’s national security”.

“Our response to any request from the United States, or other close allies and partners, will be based on whether there is an achievable overall humanitarian purpose and a clear and proportionate role for Australia as well as on a careful assessment of the risks.

“Australia is not considering putting combat forces on the ground (nor, for that matter, is the United States).”

Earlier today, ASIO director-general David Irvine was asked if any escalation in Australia’s involvement could increase the risk of terror at home.

He said he could not see any “immediate” link.

“There may be some people in the Australian community who would object to that,” he said.

“I don’t know that it would necessarily raise the threat level but you could bet your bottom dollar we would be looking closely.”

No commitment on Iraq, Syria