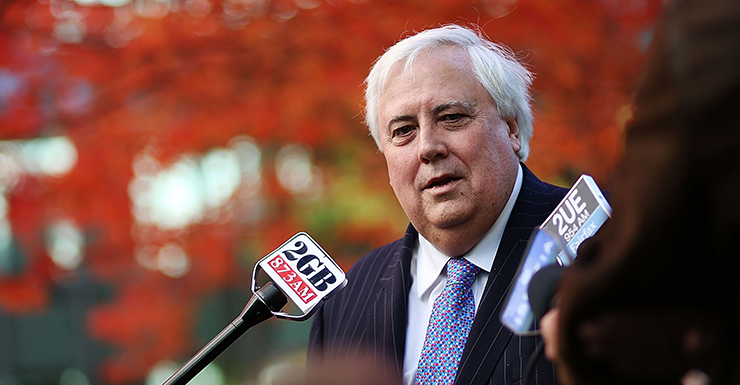 Clive Palmer has apologised over his remarks that described the Chinese government as “mongrels” that “shoot their own people”.

The comments were widely condemned, including by Prime Minister Tony Abbott, who branded them “over the top, shrill and wrong”.

“It is in the interest of the whole world that Australia and China have good relations.”

In a letter to the Chinese ambassador released by Mr Palmer’s office this morning, he wrote: “I most sincerely apologise for any insult to the Chinese people caused by any of the language I used.

Read the full letter below

“I regret any hurt or anguish such comments may have caused any party and I look forward to greater understanding for peace and cooperation in the future.

“I now come to the realisation that what I said on Q&A was an insult to Chinese people everywhere and I wish to assure them they have my most genuine and sincere apology, that I am sorry that I said the things I said on the program.

“It is in the interest of the whole world that Australia and China have good relations.”

The mining magnate and MP, whose Palmer United Party wields crucial balance-of-power votes in the Senate, was responding to questions on the ABC’s Q&A program about his bitter legal battle with a Chinese state-owned company.

“I wish he had have done it sooner.”

His remarks were followed by warnings from PUP senator Jacqui Lambie about a Chinese invasion and calls for Australia to “look into missiles”.

There has so far been no comment from Senator Lambie about her leader’s apology.

A statement released by the Chinese Embassy in response to Mr Palmer’s letter said that Ambassador Ma Zhaoxu stressed that “the Chinese people are never to be insulted”.

“Any remarks attacking or slandering China would not gain support and were doomed to failure,” it continued.

“The healthy and stable development of China-Australia relations is in the fundamental interests of the two countries and peoples, and cannot be overturned by any individual.” Foreign Affair Minister Julie Bishop, who last week joined a chorus of ministers in condemning Mr Palmer’s comments, said she was pleased by the apology.

“It seemed to be an example of Mr Palmer confusing his private interests with his public duties as an elected representative,” she said.

“But I am pleased he’s made an apology, it’s appropriate in the circumstances, I wish he had have done it sooner.”

The Federal Government is in the middle of negotiating a free trade agreement with China, and Trade Minister Andrew Robb said Mr Palmer’s comments had done potential damage to the prosperity of millions of Australians.