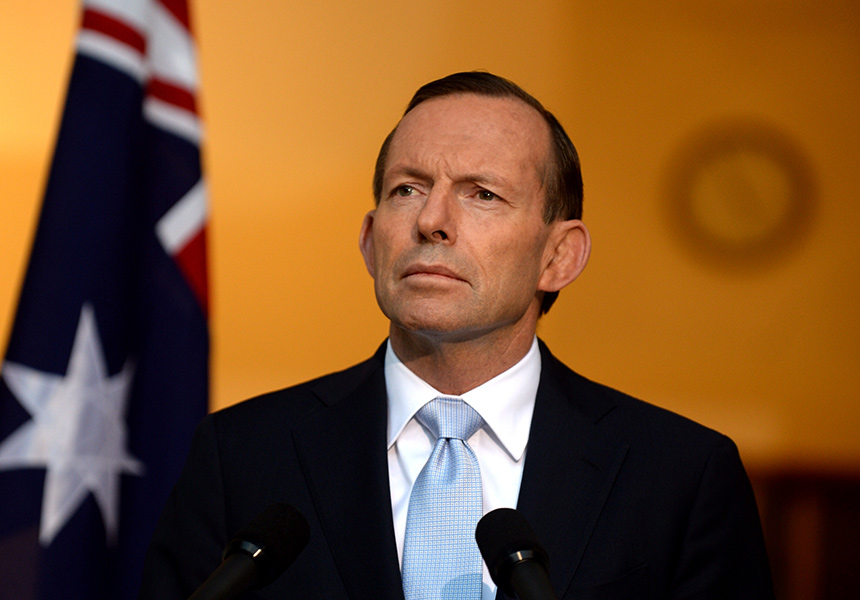 For the first time since becoming Prime Minister, Tony Abbott has struck a positive chord with the vast majority of Australians.

His response to the barbaric attack on the civilians aboard MH17 has tapped into our nation’s horror, grief and anger and established the first real connection between the Prime Minister and the people he was elected to represent.

Abbott stepped out early in response to the disaster, holding Russia to account for its likely role in the assault well before other world leaders.

“If, as now seems certain, [the plane] been brought down by a Russian supplied surface-to-air missile, Russia bears a heavy share of responsibility,” the Prime Minister said.

Having been considered only days before an international pariah for plans to scrap the carbon price, Abbott became a different kind of standard-bearer.

Foreign Minister Julie Bishop was dispatched to organise a UN Security Council resolution calling for access to the crash site, and Abbott set about calling his international counterparts to rally support.

He then advised Australians that the mood of the leaders that he’d spoken to was “firmer and sterner now than it was in the 24 hours immediately subsequent to the downing of this aircraft”.

Abbott also called Putin, later telling the media that the Russian President said all the right things, but “the challenge now is to hold the president to his word. That’s certainly my intention and it should be the intention of the family of nations.”

Putin’s commitment reportedly included agreement to support an independent investigation into the incident.

For once, the barely restrained masculinity that many find so unattractive about Abbott’s persona was exactly the stance needed to face off with the self-styled Ramboesque Putin. The cautiously clipped statements reflected the world’s demands for answers and action. And Abbott’s uncompromising approach mirrored our own determination.

When Abbott said ”we want to retrieve the bodies, we want to investigate the site, and we want to punish the guilty,” he was channeling what most Australians were thinking.

It’s a regrettable fact that, even at such times of immeasurable tragedy, politics is never really far away. Voters respond positively to strong leaders who take charge during times of crisis or despair, but particularly those who can also make an empathetic connection with their constituency.

Former Prime Minister John Howard, who saw more than his fair share of tragedy during his tenure with the Port Arthur massacre and the Bali bombing, won public support just as much for his awkward consolement of bereaved family members at the memorial services as his guns buy-back policy and provision of disaster support to Indonesia.

Former Queensland Premier Anna Bligh’s approval ratings improved considerably after she steadfastly kept the people of her state informed with a rolling series of frank and compassionate media briefings despite seemingly no sleep during the floods that devastated Brisbane.

Those are just two notable examples. While it would be unfair to suggest either politician exploited such disasters for their own political gain (Kevin with a suitcase, anyone?), they nevertheless benefited.

This awful event puts the Abbott’s considerable difficulties in the Senate over the past fortnight simultaneously into a global and very human context that gives a new sense of proportion to the Palmer sideshow.

It’s provided the PM with the opportunity to show his leadership credentials in a new light, and could serve as a circuit-breaker to arrest the sense that parliament and the Budget are spiraling out of Abbott’s control.

The PM certainly needs the respite. According to an opinion poll released earlier this week, Abbott has dropped below Opposition Leader Bill Shorten in the estimation of voters on several leadership characteristics including competency and trustworthiness. This is dangerous territory for a government that tore down its predecessor due to a perceived deficit in both qualities.

Similarly on the nose is current Queensland Premier Campbell Newman, who comprehensively trounced Bligh’s Labor Government despite the voter goodwill towards her during the Brisbane floods. After nearly three years of unpopular reforms Campbell received a huge backlash at a by-election held on the past weekend.

Newman has since taken the unusual step (for a Coalition leader, at least) of apologising for the things his government has done that particularly “annoyed or upset Queenslanders,” and committing his government to “doing a lot better in the future to try and explain our decisions and take Queenslanders with us.”

Abbott’s reform agenda is Newman’s writ large, and the lessons learned by the LNP premier equally apply to the Prime Minister.

Abbott is no doubt genuine about wanting certainty for the grieving families of the MH17 atrocity, and justice for the perpetrators. That assistance is welcome. But the PM could also help the nation more broadly by using his new-found connection with Australian voters to forge a better relationship with us. That may be Abbott’s only way to avoid a similar fate to that experienced last weekend by Campbell Newman.

Amber Heard’s sister and friend give evidence
‘Should have been a penalty’: Boy crash-tackled by PM gives his verdict
Apple sued over ‘ear shattering’ AirPods alert
Russian Google to file for bankruptcy
Man arrested at NSW school for bestiality
Concern about COVID-19 deaths in aged care
Consumers getting over budget shock
Today's Stories