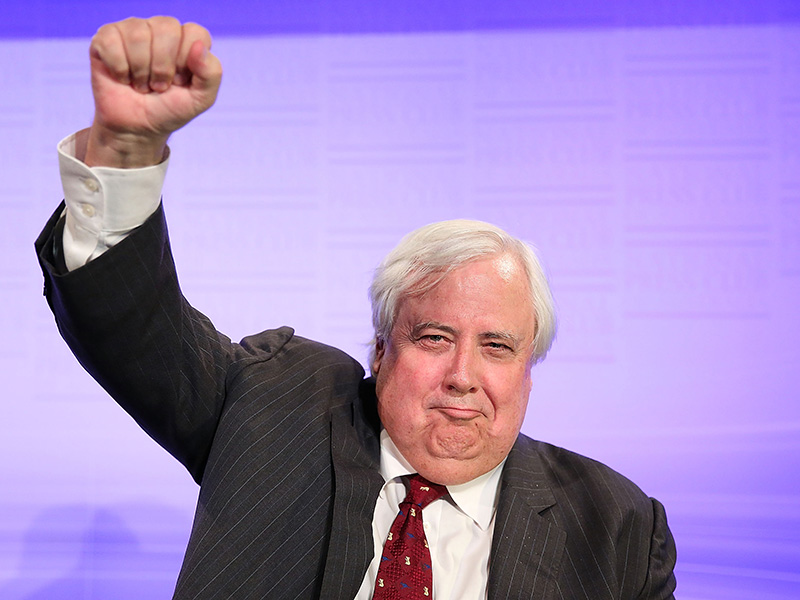 The Palmer tsunami is changing the face of Australian politics.

The jury is out on whether it’s a temporary or permanent change and how widespread the wave’s impact will be.

Support for Clive Palmer’s fledgling party sits at 7.5 per cent, according to an average of the latest polls.

This is two points higher than its vote at the September 2013 federal election.

In their first fortnight since being sworn in, Palmer’s team of three senators and cohort Ricky Muir from the Australian Motoring Enthusiasts, have kept the Abbott government on its toes.

Chaos did reign in the opening days of the new Senate, which boasts a record 18-member cross bench that proved unmanageable for the government’s Senate leadership.

But the coalition got its way on Thursday with the passing of the carbon tax repeal – its core election promise.

The PUP senators, led by rugby league legend Glenn Lazarus, went into a grand-final style hug after siding with the government to punt the Labor-Greens climate policy.

What will be carefully watched is how the coalition and PUP compete for kudos for having got rid of the tax.

PUP senators delivered the vital votes. But Liberals and Nationals put in the harder yards over the best part of four years.

However the coalition may take advantage of the confusion sown by Palmer himself. He says he supports an emissions trading scheme – basically a carbon tax with a globally-linked floating price.

Inconsistency of policy and philosophy will be PUP’s Achilles heel.

While the tax is now axed, it’s still expected to remain an issue for coming state elections in Victoria and Queensland.

Welcoming the end of a long battle, Prime Minister Tony Abbott was quick to warn that Labor still supported an ETS.

“The only way to keep the carbon tax out is to keep Labor out,” he said.

The coalition will need to keep up such arguments as state elections loom in Victoria (November 29) and Queensland (expected before March 2015).

The Morgan poll puts PUP’s support in Queensland at 13.5 per cent, the highest of any state. The party’s support is at its lowest (five per cent) in Victoria.

In Victoria, Labor is just one seat off government and holds a two-party vote of around 58 per cent, making it well-placed to topple the Napthine-led coalition.

Queensland is a much greater challenge for Labor, where it starts with only eight seats to the LNP’s 74.

But polls are now showing the Queensland state opposition on around 56 per cent in two-party terms.

PUP preferences will be crucial in the results of many marginal seats in both states.

Despite Palmer having been a long-time supporter and member of the Queensland Nationals and the LNP after that, his party’s preferences have been splitting almost evenly between the major parties.

An ABC analysis of the 2013 federal election result showed PUP’s preferences going 46.3 per cent to Labor and 53.7 per cent to the coalition.

However, in the case of Palmer’s 2013 win in the Queensland federal seat of Fairfax, 81.2 per cent of Labor preferences went to the party leader, without which he would not have won.

Past elections have shown preferences are crucial in about two out of every three seats.

Palmer has pledged to run a strong team at both state elections but it’s Queensland that is squarely in his sights.

“Queenslanders can’t wait for the next state election to punish Campbell Newman with their votes for his government selling our schools and hospitals and outsourcing services,” he says, summarising his Sunshine State agenda.

Disenchantment with the Abbott government in Canberra, especially over federal budget cuts, is expected to play into his hands as well as Labor’s.

Opposition Leader Bill Shorten’s response is to blur the lines between PUP and the coalition.

“What a fantastic state for the Liberal Party,” Shorten told parliament.

“What we’ve seen this week is that there’s a new party in Australia: the PUPpets. They are being run by Clive Palmer. How embarrassing.”

Time will tell whether the Palmer wave merely subsides or mires politics in a perpetual bog.