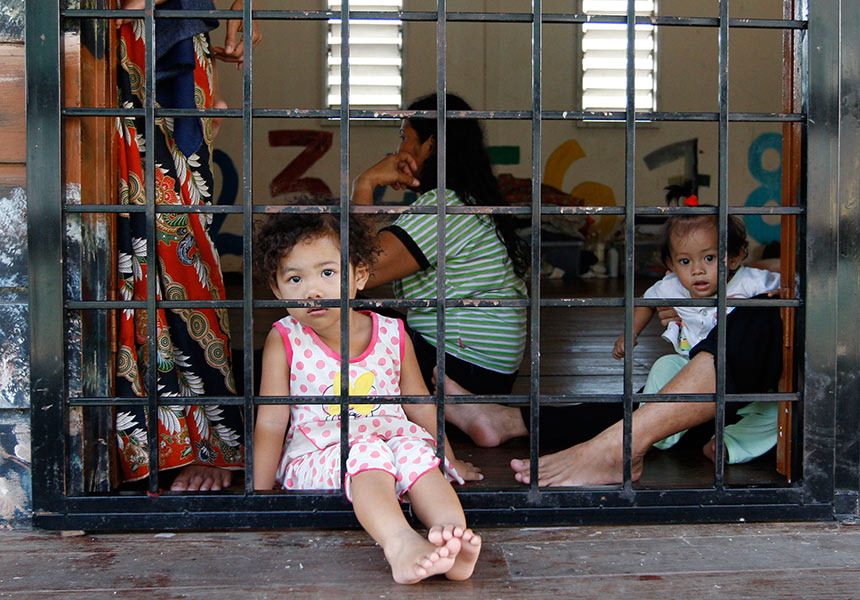 He is three months old and in detention. But he is not fazed. Instinctively, he wants to be warm, fed and safe.

However, they boy’s mother, who gave birth to him in a Melbourne detention centre, says she is “heartbroken” and fears for their safety have “meant long sleepless nights”.

She has been detained in Melbourne’s Immigration Transit Accommodation (MITA) with her son and husband for more than seven months. Previously, they spent more than four months on Christmas Island.

Speaking with The New Daily on the condition of anonymity – because she fears their asylum application might be affected – she tried to explain their reasons for taking the treacherous boat journey.

“We don’t want to go to Manus or Nauru. We want to live a happy life, there is no future for my son there.”

“We left our country because of war, we didn’t want to live in a place where our life was in danger everyday. But now I’m even more worried because of my sons’ future,” she said.

“We don’t want to go to Manus or Nauru. We want to live a happy life, there is no future for my son there.”

The number of children, including newborn babies, sent offshore have risen 56 per cent since January 2014, and she fears they might be next.

The latest figures released by the Department of Immigration and Border Protection shows 208 minors, including newborn babies, being shipped offshore and 1006 children in Australian detention centers.

That led to an outcry from refugee advocacy groups, mental health professionals and a national inquiry by the Australian human rights commission.

The New Daily contacted immigration minister Scott Morrison, but he has not respond to questions.

National Director of Uniting Justice for the Uniting Church Reverend Elenie Koulos said the government was using innocent children to send a message to the people smugglers.

“It is immoral to damage and use children to make political points and to send the message to people smugglers,” Rev Koulos told The New Daily.

She said it was not acceptable to detain children and the government needed “to bring back all of the children and their families from Nauru” before it was “too late and their already fragile mental health deteriorated further”.

Prof Newman said offshore centres were “very depriving, harsh environments” and “there were multiple risk factors, particularly because the centres were very under resourced”.

“There are some major deficits in terms of what facilities are available in these sorts of locations, very limited child specialists services, very limited activities for children.

“That combined with any real sense of what is happening in the future and the impact on parents, creates a very high risk situation, resulting in deterioration of their mental health,” Prof Newman warned.

In 2004, Australian Human Rights Commission released a scathing report, which found that Australia’s system of mandatory detention of children was “fundamentally inconsistent” with its human rights obligations.

After the report was released, the number of children in detention dropped. However, the latest figures, have led to a National Inquiry into Children in Immigration Detention 2014.

Australian Human Rights Commissioner, Professor Gillian Triggs, told ABC News 24: “As a matter of very clear international law, children should not be detained for anything more than what is absolutely necessary for health checks and security checks.”

Article 37 of the Convention on the Rights of the Child, that Australia is a signatory to, says “no child shall be deprived of his/her liberty unlawfully or arbitrarily”.

“The arrest, detention or imprisonment of a child shall be in conformity with the law and shall be used only as a measure of last resort and for the shortest appropriate period of time,” it says.

A six-year-old girl, who has been in MITA for a year said she was “tired of not being allowed to get outside.”

“I don’t know why we are here. I asked my mom and she says we will go out soon. I want to go out now, but I don’t want to ask my mom again because she will cry,” the young girl, who is named after a flower, said.

“Witnessing people around them deteriorating, witnessing protest behaviour, rioting, depending on what’s going on, all of those are very frightening experiences for children, so you see high rates of PTSD (Post Traumatic Stress Disorder) in children,” she said.

“But I think the question is about, given that we know this and the evidence is so clear, why are we doing this again?”