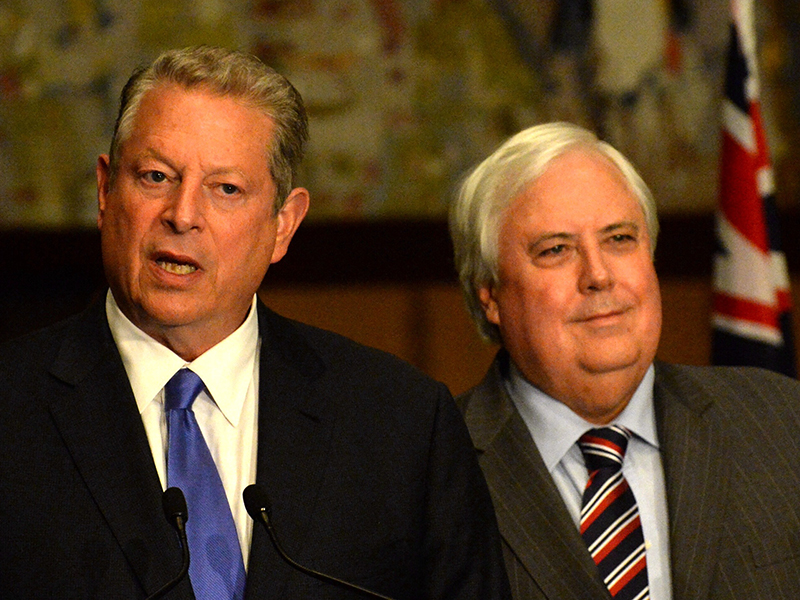 It’s not by chance that political cartoonists have begun to depict Clive Palmer as a master of misdirection. One satirist sees him as a ventriloquist manipulating an Al Gore dummy, another as a magician eliciting gasps of mock horror as he saws the carbon tax in two.

It’s hard not to get distracted by the sideshow, but if one does make an effort to peer past the smoke and mirrors it becomes quickly clear what Palmer is up to.

Not being one to place boundaries on his ambitions, canny Clive has likely been looking for ways to expand his currently modest support base beyond those formerly known as Coalition voters.

Palmer would know his climate change position dissuades centrist Labor supporters from joining the flock, no matter how disenfranchised they feel from the ALP.

Gore’s negotiators offered the PUP leader a perfect solution: essentially a public sanction from the climate action guru to scrap the carbon price in return for an amorphous emissions trading scheme, short-term retention of the previously rejected renewable energy target, and preservation of the Clean Energy Finance Corporation and Climate Change Authority.

Such a deal would have seemed a bargain at twice the price to Palmer, who sees no virtue in policy purity or consistency and makes commitments according to the opportunities that arise to win over new cohorts of voters.

For like the fabled trickster of old, Palmer fancies himself the Pied Piper of Canberra, but instead of luring the nation’s children away from their parsimonious parents he’s recruiting disaffected voters from the major political parties.

It should have been heartening to see a coal and mineral magnate such as Palmer convert almost overnight to the need for climate action. But despite Palmer’s fine words, it’s likely the fossil fuel champion was doing little more than sending a hypnotic tune in the direction of those voters looking for something, anything to be done to reduce greenhouse gas emissions.

Palmer is the consummate populist, more so even than the great Kevin ’07. Though unlike Rudd, and Gillard after him, who tried to woo progressives back to the Labor fold, Palmer started out harvesting disenchanted conservatives.

This ‘no care, no responsibility’ approach also gives Palmer the flexibility to spin on a dime, as he did when he took to the stage with Al Gore last week.

It is for this reason Palmer’s current policy manifesto, despite being a detail-free zone, nevertheless reads like a Coalition voter’s wishlist: no carbon tax, no cuts to pensions, no increases to taxes, no cuts to benefits, no GP co-payment and no paid parental leave for rich city mummies.

Palmer promises to thwart these budget measures with nary a care about the bottom line consequences, because fixing the budget was never one of his election commitments.

This ‘no care, no responsibility’ approach also gives Palmer the flexibility to spin on a dime, as he did when he took to the stage with Al Gore last week.

The representations of Palmer as an illusionist are certainly right in one respect; Palmer is treating voters as gullible audience members and preying on their preparedness to suspend disbelief in the name of entertainment.

Yes, entertainment. That’s how most voters like to consume their politics – packaged up like a reality show or Friday night game with winners and losers and perhaps a bit of biff before the ref steps in.

The media like it that way too. They know Palmer is evading scrutiny of his policies by diverting the chooks with fancy cars and outlandish statements, but “hey at least Clive gives good clickbait”.

Palmer is answerable to no-one other than the voters of Fairfax – when he’s not claiming to be unfussed about getting re-elected – and can cut his policy cloth to suit whichever circumstances he finds himself in. The transmogrification of his position on climate change from denier to advocate to skeptic is a perfect case in point.

So far Palmer has mostly avoided accusations of hypocrisy and mendacity for trying to be all things to all people. When occasionally challenged by the media on his logic or consistency, he claims the accusation is simply not true or that he doesn’t care.

Palmer doesn’t want the audience to demand to see what’s behind the curtain – that would expose the almost anarchistic way he’s wreaking destruction on the federal budget, let alone other major policy initiatives.

Palmer prefers instead that we just sit here, immersed in the spectacle, and do nothing more than delightedly clap while shouting brava! at his skillful audacity and showmanship. Oh, and that vote for him at the next federal election.

Smoke and mirrors: What Clive Palmer’s really up to