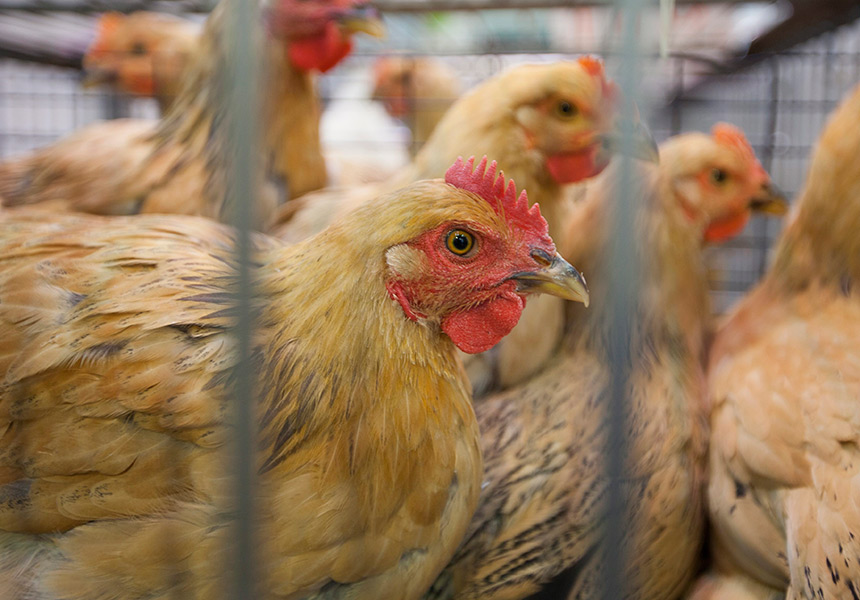 Researchers have found evidence of a banned antibiotic in chickens for sale in major supermarkets and butchers.

Scientists from the School of Biology at the Australian National University took 281 samples from three major supermarkets and a butcher around Canberra.

In those chicken samples contaminated with the common bacteria E.coli, almost two thirds of the bugs were resistant to some form of antibiotic.

Therefore if a human were to get sick from the contaminated chicken meat, doctors would find the illness difficult to treat. Researchers were particularly concerned to find four samples resistant to fluoroquinolone antibiotics, which are banned from use in Australian food-producing animals.

The strong antibiotics have never been approved for such uses in Australia, and the country is highly regarded for having low levels of fluoroquinolone resistance.

Researchers Belinda Vangchhia and Professor David Gordon from the ANU says their findings suggest that the food people consume is a significant source of antibiotic resistance.

“Just by consuming the meat we can be exposed to the antibiotic as well.”

They suspect the contamination is happening somewhere in the production process.

“It would be worth the relevant authorities going back through the steps of the processing to see where the introduction of antibiotic resistant bacteria might have occurred.”

Is transmission happening on farms? Antibiotics generally are used widely on farms for both preventing and treating illness.

They are also used in some cases for “sub-therapeutic” treatments where farmers administer antibiotics to help fatten up animals.

The theory is the drugs affect microbes in the gut which allow the animals to absorb more of their food and get fatter.

University of Sydney academic Dr Stephen Page, a veterinarian and clinical pharmacologist who consults for the Australian chicken industry, says it is highly unlikely Australian chickens are being fed banned fluoroquinolones at farm level.

Dr Page believes contamination with resistant E.coli is happening elsewhere, and says the specific drugs do not help fatten up produce and are expensive.

Fluoroquinolones are only available in Australia through veterinary prescription in tablet and injection form for cats and dogs. The antibiotic is not available in liquid form to be put in chickens’ water supply.

Dr Page says fluroquinolines would have to be imported and would likely to be detected by the Australian Customs and Border Protection Service (ACBPS).

“I know nobody in the industry who would even contemplate an illegal practice, especially one that has only one outcome and that is undermining the world-class reputation of the chicken meat industry.”

Stringent controls have also meant vets do not need to turn to strong antibiotics because existing drugs work.

“We have good management of poultry health in Australia so there would be no need to use them,” Dr Page said.

“I know nobody in the industry who would even contemplate an illegal practice, especially one that has only one outcome and that is undermining the world-class reputation of the chicken meat industry.

“There would be no financial gain in using them, only pain.”

Could it be harmful? Most harmful bacteria, including antibiotic-resistant E.coli, are destroyed when chicken is cooked properly.

However, during food preparation chickens come into contact with humans and household surfaces.

There is also some evidence that some bacteria and antibiotic residues can remain at low levels in meat after cooking.

Ultimately, transmission depends on the method of cooking, the bacteria, the antibiotic and the meat.

A 2000 study from the Netherlands of cooked pork meat found most common antibiotic microbes were destroyed after temperatures passed 134 degrees Celsius.

“High temperature destruction process does not guarantee a full break-down of residues of veterinary drugs present in condemned animals,” the study concluded.

Many farms ensure a delay between treating animals with antibiotics and sending them to the abattoir to ensure drugs leave the system.

The ABC asked the federal Department of Health, the Department of Agriculture, the Australian Pesticides and Veterinary Medicines Authority (APVMA) and the NSW Department of Primary Industries about regulation of fluoroquinolones.

The NSW Department of Primary Industries says fluoroquinolone regulation is the responsibility of the APVMA.

“Veterinarians, as the prescribing professionals, play a key role in ensuring prudent use of antibiotics consistent with guidelines developed by the Australian Veterinary Association.”

The APVMA says it licenses the use of antibiotics in animals but was not responsible for compliance with use.

“State and territory governments are responsible for controlling the use of pesticides and veterinary medicines beyond the point of retail sale,” a spokeswoman said.

“Veterinarians, as the prescribing professionals, play a key role in ensuring prudent use of antibiotics consistent with guidelines developed by the Australian Veterinary Association.”

The spokeswoman said farmers also participated in on-farm programs that required them to declare the veterinary treatments their livestock had received.

“There is potential for exposure to E.coli throughout the food supply chain,” she said.